The closing month of the regular season will determine the four teams for the College Football Playoff. Major stakes and rivalry games remain, and the pressure mounts on the top teams. We cashed a bonus winner last week with our upset pick on Purdue, who handed Michigan State its first loss of the season. A lean on Texas A&M over Auburn was the side to support, and we’ll move on to college football Week 11 picks which has a season-high five Top 25 match-ups on Saturday, Nov. 13. .

The second College Football Playoff (CFB) rankings came out Nov. 9, and those rankings differ from the AP Top 25, where Georgia has been the unanimous top-ranked team for five straight weeks.

The four teams selected to the 2021-22 College Football Playoff will be announced during the last top 25 rankings show at 12 p.m. ET on Sunday, Dec. 5 on ESPN. New Year’s Six matchups will also be revealed at that time.

Keep in mind that no 2-loss team made the playoff in its first seven seasons.

As you evaluate the Week 11 college football card and Top 25 match-ups and teams, review my recent stats update on balanced and efficient offensive teams that may assist you in your handicapping and selections.

Full game analysis is available at osga with select games below.

Oklahoma at Baylor
Line: Oklahoma -6 and Total 62.5 at FanDuel

Baylor features a strong, balanced ‘200 club‘ offense that runs for an average of 208 yards per game and passes for 218 per game. The Bears 6.6 yards per play offense ranks top 10 in the country, but is still behind undefeated Oklahoma’s 7.0. The Sooners have won 23 straight games in November and enter off a bye. Oklahoma’s offense has really taken off since Caleb Williams took over as quarterback. Williams replaced the preseason Heisman favorite Spencer Rattler during the Texas game, and OU has scored at least 50 points in three of four games. But none of those teams’ defenses are as good as the Bears, who are 5-0 SU/ATS at home and held off Iowa State for a win despite being out-gained as home ‘Dog. The Sooners defense has still been a sieve, allowing 410 yards per game and 6.0 yards per play. Oklahoma won’t get through their next three tough games without a loss, and no surprise if it starts in Waco against the bounce-back hungry Bears.

Opinion: Baylor plus the points and moneyline

Michigan at Penn State
Line: Michigan -1 and Total 48.5 at WynnBet 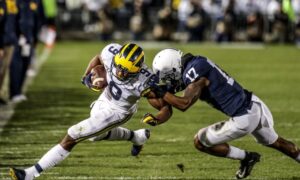 Michigan is the second most bet team this week at BetMGM behind UCLA. Michigan has the stronger stat profile and the Wolverines are also a ‘200 club’ offense with balance and efficiency averaging 234 yards rushing and 217 passing and scoring 36 points per game. Michigan has the superior running game and offensive line, and Penn State has failed to reach 100 yards rushing in three straight games and 5-of-7. The Wolverines passing game will have some success this week too following Ohio State’s success last week. Both teams defenses rank top 10 in the country allowing 4.6 yards per play, but the Lions defense won’t save them this week after we cashed an opinion play on Penn State in Week 9. The Michigan men take over this week.

Lean: Purdue plus the points

We knew the bubble would burst on Wake Forest soon with their deficient defense allowing 448 yards per game and at least 220 both running and passing. The Demon Deacons suffered their first loss last week blowing a 17-point fourth quarter lead in a 58-55 loss at North Carolina. The Wake Forest offense tops the nation averaging betting that 45 points per game. Deacon QB Sam Hartman has 27 TD passes and he’ll surpass 3,000 yards in this game with Wake averaging 330 passing yards per game. But NC State sits just behind Wake Forest in the ACC Atlantic division, and the Wolf Pack feature a defense that is 12 points per game better than the Deacons and more than 110 yards and 1.0 yards per play better on defense as well. NC State has the ACC’s best scoring defense allowing just 17.1 points per game, and the Wolf Pack’s 55.4% pass completion defense ranks top 15 in the country and is what’s needed to get the ball back against Wake’s explosive pass attack. North Carolina State QB Devin Leary has had a breakout season but gets far less attention in the ACC and nationally, yet he’s passed for 25 touchdowns with just 3 interceptions. Of course the leading online sportsbooks didn’t make 8-1 Wake Forest an underdog, but the wrong team is favored and the ‘Pack will prove it Saturday in this first place showdown.

Pick: NC State plus the points and moneyline

Check out all the Week 11 college football odds, lines, totals and top game analysis with betting breakdowns at TheLines.