The third edition of the 3M Open tees off at TPC Twin Cities following last week’s Open Championship. We made a birdie at last year’s 3M Open in our match-up of Finau (-16) over Fleetwood (cut), and we’ve chipped-in a pair of 3M Open betting tournament match-ups below looking to improve on our 19-9 tournament match-up record this year.

I chipped-in another early week 3M Open betting preview at TheLines, and odds are listed along with some of the favorites below from the SuperBook.

The TPC Twin Cities opened in 2000 and was the host course for the 3M Open on the Champions Tour. The Arnold Palmer design was renovated in 2018 and included narrowing of fairways, addition of bunkers (72 total) and repositioning of tee complexes. There are 27 water hazards on the course with 10 coming into play off the tee.

TPC Twin Cities is one of the easiest courses to drive, and in the inaugural event the average distance was well over 300 yards with average fairways hit at 65%. So players can attack the average size greens, and the course is among the easier on the PGA TOUR for greens in regulation. However, the course rating is among the ten toughest on the TOUR in 2019 to get up and down if players missed the green on approach.

Another shootout is expected and low scores widens the list of players with longer golf betting odds to hit the leaderboard and contend for a top finish or win. The winning scores the past two years of the event have been -21 (263) and -19 (265). In 2019, six of the top-10 finishers had pre-tournament odds to win of +8000 or greater including winner Matthew Wolff (+12500), whose eagle on the closing par 5 gave him a one-shot win over Bryson DeChambeau and Collin Morikawa.

I added some golfers to watch and longshots in my preview at TheLines, and chipped-in some below. 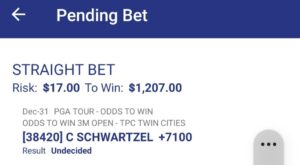 Charl Schwartzel (+7000 FanDuel): Schwartzel finished T3 in his only 3M appearance last year. Strokes Gained Approach is of greater significance this week per data golf stat profiles, and over his last 24 rounds, the South African ranks top-20 in approach, ball striking, tee-to-green, off-the-tee and total. Going back to May, he had three straight events of at least 4.5 strokes gained on approach, and his par 4 efficiency numbers on holes of 450 yards or less rank among the best in this field at TPC Twin Cities. In last year’s 3M event, Schwartzel’s stats were strong including a better putter as he gained 4-strokes putting and better than 10 strokes total. His pure ball striking and solid tee-to-green game is of more importance with additional water and hazards this week.

Doug Ghim (+4800 FanDuel): Ghim ranks highly in this field in birdie average, and the 25-year-old is accurate and strong with his irons ranking top-11 on Tour in greens hit. He also ranks No. 1 in greens in regulation gained and fairways gained over his last 36 rounds. The bookmakers respect his play and potential despite ranking outside the top 200 in the world golf rankings. Over his last 36 rounds, he’s top-6 in approach, ball striking and tee-to-green, but his poor putting and short game is holding back stronger finishes. Over the past year, one of his three best putting rounds came at TPC Twin Cities, and Ghim finished T18 last year at 13-under par. Ghim has shot double-digits under par in his last two events on scoring courses, and a better week of putting puts him in the mix with +500 odds for a top-10 finish also worth a bet.

Some key stats and categories to evaluate more closely for the 3M Open include:

Next week it’s the Olympic Men’s Golf Competition in Japan, and no PGA TOUR event. The first week in August is the WGC FedEx St. Jude Invitational – a no cut event that had just 78 players last year.