NFL Handicapping – Inside the Numbers 2020 Through Week 12

Handicapping and Analyzing Stats – Inside the Numbers 2020

Throughout the NFL season, I go inside the numbers and review weekly box scores, stats, game recaps and more after watching many of the NFL games. For over a decade, I have kept a proprietary database of statistical information and utilized relevant rushing numbers, statistical guidelines and situations to better assist me in sports investing and providing point spread winners. This week we’ll go Inside the Numbers 2020 with a compilaton of stats and rushing numbers through Week 6.

I provide additional details and analysis in my NFL inside the numbers 2020 breakdown at Offshore Gaming Association.

The push towards the playoffs continues into December, and the importance of point of attack play and both running the ball and stopping the run becomes more significant later in the season as the weather changes and teams battle the cold, wind and now snow in some stadiums and locations.

We’ll review more rushing numbers below, but note that scoring has slipped the past three weeks to 47.3, 45.5 and 45.7 points per game. Over the first nine weeks, scoring averaged more than 50 points per game. We were able to cash in a strong totals play on Wednesday with the postponed Steelers and Ravens game that Pittsburgh won 19-14 and we bet previously UNDER 45.5 before it was reposted at 40.5 with the Ravens suffering numerous personnel losses to Covid-19 for the game including QB Lamar Jackson.

After getting on track in Week 11 with a 4-0 ATS result and three outright underdog winners, I noted the importance of running the ball and stopping the run in my Week 12 update. That included a situational Play of the Day winner on the Falcons (+3.5) over the Raiders 43-6 despite the apparent rushing edge for the Raiders. That game showed the difficulty of projecting rushing advantages even though the stats may say otherwise. Scheduling, injuries, Covid-19 and emotional and physical toll takes over at this time of year too.

I track proprietary data and rushing stats I learned to use in handicapping the NFL more than two decades ago. I load boxscores into Excel spread sheets each week, and review boxcores, stats, scoring drives and the impact of turnovers. It has helped me in handicapping and isolating more potential value and winners through the years including an unprecedented 8-year run where I won every season and hit better than 57% ATS on nearly 650 NFL plays. 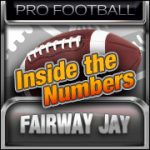 So in looking Inside the Numbers this season and evaluating the running game and point of attack play, you can hopefully learn to handicap the running games and use it to your advantage when betting the final month of the season and in future years as you become more proficient in breaking down match-ups and games. It’s just one area or way to evaluate a given match-up each week. But if you’re having difficulty finding edges in certain contests or match-up advantages in the fundamental handicapping approach, take a look at the running games, net yards per play and injuries or player absences. The missing players along the offensive or defensive line are often more meaningful, and may assist you in identifying which teams may take advantage of the match-ups at the line of scrimmage to control the running game.

Of course the quarterback is of most significance in the NFL, and the most impact on the betting lines. The Saints went from -6 to -13 to -16 and then closed -17 in places last week when it was announced that the Broncos would not have any of their three quarterbacks available. While that’s a rare situation, as is the year 2020 and how we approach games, it also is a learning situation to understand when and how to bet and the continued changing situations surrounding Covid-19.

Note that there are just a handful of games when both teams may rush for 150 or more yards, or both teams rush the ball 30 or more times in game and those contests are not included in the stats.

Check out more of the article and stats at osga, and we’ll continue to evaluate more stats and provide additional information you can bet on as the push towards the playoffs and the close of 2020 (thankfully) comes to an end soon.