In the Money at the WSOP Main Event

Cashing in, Raising and Bluffing to the WSOP Final Table

The money payouts started at $15,000 for those 1,182 players that made in through day 3 Saturday. The payouts increase incrementally as players are eliminated. The payouts starting in day 5 Monday become more than $35,000 and increase to more than $100,000 for the final 72 players with much bigger bumps up the pay scale as players work their way towards the final table and millionaire status.

The starting field of 7,874 was the 2nd largest Main Event field in WSOP tournament history. This year’s field produced a 9% year-over-year increase from 2017 when 7,221 players entered the main event. The 2006 WSOP Main Event had a record 8,773 players and $12 million 1st place prize.

The 2018 prize pool of $74 million will pay each member of the Final Table at least $1 million with a 1st place prize of $8.8 million. Last year’s champion Scott Blumstein was eliminated on day 1, along with many other noted professional that went out prior to making the money. However, many top professionals also made it to the money, and others are still alive as play resumes Monday.

ESPN Coverage of Main Event, Final Table and Growing the Game of Poker 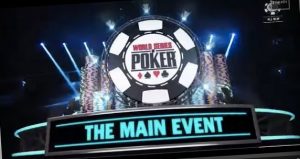 Main Even play continues to July 12 when the Final Table of 9 will be formed on the felt, and those players will play down to a world champion crowned on July 14.

The sports television giant ESPN is broadcasting the Main Event along with live stream provider PokerGO. The ability of fans to watch the action live (30 minute delay) while seeing the poker player’s hole cards offers an enhanced experience that has proven to be wildly popular.

The beauty of the modern poker game is revealed, and ESPN is allowing fans to get inside the game and up close to the clacking of chips that surround the convention halls and poker tables at the World Series of Poker. While this kind of hole-card coverage has developed into a huge success over the past decade, it’s still got room to grow and become an even greater event with better scheduling and social media interest and coverage.

But one scheduling misfire ESPN appears to have made is not providing a longer break once the Main Event Final Table of 9 players has been determined. The elimination of the ‘November Nine’ was fine, as for a number of recent years the Final Table was played more than three months following the Main Event. Last year the change was implemented to allow two full days off between the Main Event’s long seven days of play and the Final Table. This year’s Main Event Final Table play will continue 15 hours following Day 7 and the formation of the final 9 players at the Final Table. Last year’s two-day break allowed the final nine players a well-deserved rest and recovery as they now played for significant money starting at $1 million to a champion that would earn more than $8 million.

But that two-day break benefit allowed the media to create stories and produce interviews for casual fans and build-up the coverage for the Final Table. Englishman John Hesp became a wildly popular player at last year’s WSOP Main Event Final Table, as the 64-year-olds colorful attire, style, humor and personality became polarizing. His story emerged on Day 4 last year, and he completed an ESPN interview in the days just prior to the Final Table. He became a real fan favorite and an underdog that fans latched onto, taking the chip-lead briefly at the Final Table on his way to becoming an international poker celebrity in the span of 48 to 72 hours.

The two-day break also allowed the players necessary rest and recovery for this once-in-a-lifetime experience, and it gave them an opportunity to invite family and friends to the event with enough time for them to travel and arrive to experience the Final Table showpiece. Who could forget Main Even winner Scott Blumstein’s cheering section, many in from his home state of New Jersey, and his commanding chip lead much of the Final Table?

Blumstein said, ”I don’t have an ego in this game. I check my ego at the door. I know where I stand.”

Many poker players have an ego and so does ESPN, who could stand to learn a little bit more about promotion, productivity and profit. Gambling too is going main stream with the recent passing of legal sports betting in the U.S. and states now able to provide and pass legislation to allow sports betting.

That’s another area of growth in poker that is likely coming with more betting at the sports books being offered in the future. Perhaps the ‘last longer’ bets that poker players often engage in between themselves will become a head-to-head match-up bet offering at the sports books, along with win bets, final table or top 50 finishes, or other prop bets that are created. Win odds for the 2018 Final Table participants will be offered at some of the leading online sports books once the Final Table of 9 players is established.

The last time the final table took place the day after playdown day was in 2007, which is also the year before the inception of the November Nine. Social media did not exist as a means to promote players and ESPN owned all rights to broadcast the final table. Changes in technology and added social media coverage have enhanced the game of poker, and so too have rules changes like the big blind ante and a ‘shot clock’, which was implemented on selected events high buy-in events at this year’s WSOP. Both the big blind ante and shot clock will be in playing during the $1 million Big One For One Drop Event.

ESPN is also broadcasting that final event of the WSOP, as Event #78, The Big One For One Drop No Limit Hold ‘Em with a $1 Million entry fee begins on July 15. It seems that three-day event could have started on July 12 and allowed the Main Event Final Table participants a four-day break with restart on July 16.

ESPN is televising the WSOP Main Event because it’s proven so popular and ratings are through the roof. Thus revenues are big, which should also create more advertising opportunities and additional revenue through partnerships and coverage.

But it seems ESPN and the WSOP missed an opportunity to promote the Final Table and provide more detailed interviews, stories and build-up the star power of the players and event. Perhaps most importantly, they missed an opportunity to grow the game of poker and bring more fans in to view the Main Event and it’s featured Final Table, which would help not only ratings, but bring more potential entrants to future WSOP Events including the headlining Main Event.

I’m not sure how ESPN or the WSOP missed the opportunity to promote poker and its biggest event more, however, the fault can’t be too hard on them. The game of poker, its coverage and acceptance as a social game and one nearly everyone can enjoy is in a better place than even a decade ago after the poker boom really took off following the Moneymaker effect at the 2003 WSOP.

But know that the World Poker Tour (WPT) announced last month that nine Final Table WPT events will be played at the new Esports Arena at the Luxor Hotel and Casino in Las Vegas with a 3-6 week gap between tournament play events and the Final Table.

The WPT is elevating the game of poker as a whole, and Las Vegas is the global home of poker. The WSOP has helped grow the game tremendously especially after its move from downtown Las Vegas to the Rio All-Suite Hotel & Casino in 2005. Now it’s time for a break and another tweak, and one between the WSOP Main Event Day 7 and the Final Table. Consider this a semi-bluff strategy, a move that makes the difference between winning a little, and winning a lot. A minor change by ESPN and the WSOP that could have a major impact on the game of poker. You can bet on it.