A week ahead of The Masters and the PGA Tour heads to TPC San Antonio for the Valero Texas Open. I provide some updates, Valero Texas Open odds and information you can bet on below along with PlayUSA and FanDuel with some mid-range players and longshots to target.

Spieth is the biggest liability to the sportsbook with more than double the handle of the next closest player, Tony Finau.  Update: Abraham Ancer has withdrawn from the tournament as of Wednesday late afternoon. 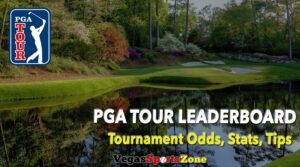 Last year we had a 100/1 win bet on Matt Wallace for a $1,700 payout, and he was tied with Spieth for the 54-hole lead before finishing solo third. The top finishing position wagers are better prop bets than the small chance of picking a winner and more not getting enough value on a majority of the players and especially the favorites.

Fewer details this week with time and research, but here are the picks.

This is a big price, but if Circa Sports in Las Vegas is going to offer us the best player against banged-up Bryon returning from injury and hardly interested in playing or at his best, then we’ll take a shot.

DeChambeau: “Am I going fully at it? No. Not even close,” DeChambeau said ahead of the Valero Texas Open. “I won’t be able to go at it until probably Augusta time.” Hardly sounds like a player to count on, could perhaps even withdraw at some point, and is just trying to get some swings in to be more fit heading into The Masters. Bad Bryson’s Around the Green game is beyond bad over his last 50 rounds, ranking No. 123 in this weaker field. He’s barely been hitting his driver in recent weeks, let alone getting his short game in order.

McIlroy finished 2nd in this event in his only start in 2013.  He sat out the WGC- Match Play event last week to focus on preparations here and for The Masters. McIlroy is the top ranked player in the field at No. 9 in the world. Over his last 50 rounds, Rory ranks No. 1 in this field in Strokes Gained: Total, and top 5 in Ball Striking, Tee-to-Green and Off-the-Tee. McIlroy is also top 10 on Approach and top 15 Around the Green – two key categories to target this week.

Of the last 10 Valero Texas Open winners, five won for the first time. There are 20 players in the field this week that are also playing in next week’s Masters.

Each of the last eight winners had played the Valero Texas Open at least once before and made the cut on their most recent visit.

We’ll fire away at The Masters next week, where we went 2-0 on tournament match-ups last year.