Brutal Test of Survival Skills and Nerves in U.S. Open at Oakmont

Following the Stanley Cup victory parade for the Penguins this week in Pittsburgh, the attention now shifts to nearby Oakmont Country Club, where a test of survival will determine another champion. This year’s U.S. Open at Oakmont is the nastiest test in golf, built for the sturdy and brave, designed to identify the best player in the world but more often than not producing the heartiest survivor over a rugged weekend for those that make it that far.

Nearly half the field of 156 players went through qualifying to get a shot at Oakmont, but history suggests one of the games stars will embrace the trophy Sunday and join a list of the games greats that have won at Oakmont: Gene Sarazen, Bobby Jones, Tommy Armour, Sam Sneed, Ben Hogan, Jack Nicklaus, Johnny Miller and most recently Ernie Els (1994) and Angel Cabrera (2007). Runner-ups include Arnold Palmer, Sam Sneed, Tom Watson, Jerry Pate, Colin Montgomerie, Loren Roberts and in 2007, Jim Furyk and Tiger Woods. 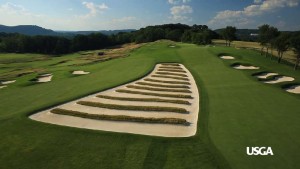 I provided some preliminary articles and insight on the U.S. Open for the Off Shore Gaming Association, analyzing the most rigorous test the players face this week at Oakmont.

Following a review of the players, match-ups, stats and strategies to succeed and survive at Oakmont, I provided thoughts and analysis on players that could have success along with match-up selections.

Very few changes have been made to the golf course since 2007, and Oakmont will host the U.S. Open a record ninth time this year.

Patience, resolve, experience and superior skills are needed to survive and succeed. Playing from the fairway and short grass is paramount, as is supreme putting skills.

The course will play to a par 70 and just over 7,200 yards.  Read through my articles and analysis, and know that Oakmont is the gold standard for a U.S. Open venue.

Just what a U.S. Open is supposed to be.