Players to Watch at The PLAYERS Championship

Following a very successful Master tournament with match-ups and a small score on Sergio Garcia to win, we’re back for The PLAYERS Championship. A new-look TPC Sawgrass awaits the players in warm and sunny Ponte Vedra Beach, Florida. Tifeagle Bermuda grasses have been installed on all the Stadium Course’s greens over the last 12 months. Many holes have seen changes including the 12th, which has been converted into a driveable risk-reward par 4.

In total, the Par 72 will play approximately to 7,215 yards with tees allowing some changes to yardage. That includes the short par 3 island green at hole No. 17 measuring less than 140 yards. The 18th hole is still one of the most demanding finishing holes on tour with water awaiting wayward drives down the left side on the closing par 4. 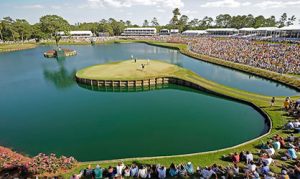 The course continues to demand accuracy as big bombers have no advantage at TPC Sawgrass. Precise use of the silverware is paramount, so Greens in Regulation (GIR) is essential to success when hitting into many smaller greens. In the last 14 years, 11 winners of the PLAYERS have finished top-13 in GIR. Note our match-up play of McIllroy (No. 32 in GIR) over Spieth (152). Driving accuracy stats show the importance of avoiding hazards and rough. Of the last 13 champions, 10 have finished top-25 in driving accuracy for the week. The tight Pete Dye design can be tricky with sightlines, creativity and hazards awaiting. The new, but improved putting surfaces will be something to watch as players putt on them for the first time in tournament play. Experience on the course and Pete Dye designs certainly helps when navigating TPC Sawgrass. Of the last 14 winners, 10 had at least one top-10 finish at THE PLAYERS prior to the year he won.

Here are a few comments and stats on some of the top players in the most competitive and elite field this week.

Jason Day is the defending champion, and he arrived at last year’s tournament as the No. 1 player in the world and won by 4 strokes (-15). He has not won a golf tournament since, and no defending champ has ever won the PLAYERS. This year he enters No. 3 while trying to round his game into top form.

Dustin Johnson is the current No. 1-ranked player, but he’s struggled at the PLAYERS. Johnson has never finished in the top-25 in six starts at the PLAYERS. He withdrew from the Masters, and had won 3 straight tournaments prior. Then last week, he finished 2nd on a new course at the Wells Fargo Championship in North Carolina. He has six top-10s this season, which is tied for the most on Tour.

Rory McIllroy is No. 2 in the world and has finished 12th or better his last four starts at the PLAYERS after missing the cut his first three tries. He’ll be playing his first tournament since getting married and returning from his honeymoon last week, but he’s finished top-7 in all stroke play events this year. Hoping there is no honeymoon hangover.

This year’s Masters champion Sergio Garcia is up to No. 6 in the World Golf Rankings. He has a terrific record at the PLAYERS, where he won in 2008 and has also finished 2nd on two occasions along with a 3rd place finish.

Hideki Matsuyama is No. 4 in the world after finishing 11th at the Masters. He’s been solid in 3 starts at the PLAYERS including T7 last year.

Jordan Spieth is No. 5 in the world and after a T4 at the PLAYERS in his debut, he’s missed the cut his last two times around the Pete Dye designed track. A T11 at the Masters is okay, but his GIR problems (132nd) are not.

Ricky Fowler is No. 9 in the World Rankings and he won the PLAYERS in 2015. He’s near the top of Strokes Gained Tee to Green and Scrambling this season.

Adam Scott seems somewhat forgotten, but the former No. 1 is currently No. 11 in the World and won the PLAYERS in 2004 and has played well at TPC Sawgrass.

No. 10-ranked Justin Thomas finished 3rd in the PLAYERS last year. Along with No. 12-ranked Jon Rahm, who makes his first start at TPC Sawgrasss, those two are rising stars and tied with Dustin Johnson for the most top-10s on Tour (6).

Looking for a long shot or someone to include in favorable match-ups?

Matt Kuchar is a consistent top-20 ranked player who finished T3 at The PLAYERS last year. He finished 4th at this year’s Masters, and 11th the following week at Harbor Town, another tight and challenging Pete Dye design. His game and form is good enough to be favored -150 over Phil Mickelson this week in head-to-head tournament match-up.

Martin Kaymer won here in 2014 and is accurate and a supreme iron player who is rounding into form with six straight top-25 finishes this year.

Others off the radar at longer prices with some supporting stats or course form: Horschel, McGirt, Kisner, Knox, Leishman, Stanley.