The Masters – Player Profiles and Picks

Betting the Masters and Players Profiles

Review my Masters Preview article and you’ll gain some insight into the tournament and betting perspective. Now we’ll evaluate some of the players and assess their chances noting the Masters odds to win along with match-up lines, golf odds and more at the sports books. Feeling this year is that one of the top players and contenders will put on the Green Jacket on Sunday.

Understand that match-up betting and some player props are your best bets, and that your main handicapping focus should be on current form and a players experience and results playing at Augusta National. Following those guidelines to isolate some potential tournament winners and more money in head-to-head match-up wagering will put the odds in your favor.

The average Official World Golf Ranking of the last 10 Masters winners before they won at Augusta is 24, with the lowest-ranked player to win in the last 10 years being Zach Johnson, who ranked 56th in 2007 before his victory. The last five Masters winners had an average world ranking of 10.6 the week before they won. So while Augusta National Golf Club invites elite amateurs and the winners of qualifying events held around the world, the contenders are well-known, highly-ranked players.

Premier putting is essential at Augusta, as the lightning speed and severe undulation of the greens is significant. Thus experience on these surfaces and slopes is a major advantage. There is no rough at Augusta National, just a spin-reducing second cut, so the course rewards distance and does not punish missing the fairway like traditional venues used during U.S. Opens and PGA Championships. The stats validate this assumption and show big hitters fair about .3 shots per round better at the Masters than their standard score. Golfers who have length off the tee also tend to be statistically dominant in strokes gained from long range in the fairway (250-300 yards), and they can attack par 5s more effectively than other players.

Each of the past four Masters winner’s entered in good form and recorded at least a top-5 finish in their four tournaments prior to teeing it up at Augusta National.

Here are the player pairings and tee times for the opening two rounds of the Masters, and some player profiles and projections. 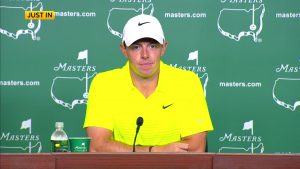 Rory McIllroy: McIllroy enters this year’s Masters with a light workload similar to 2015 when he finished 4th in the Masters (-12) after shooting 68 and 66 on the weekend. In 2011 he shot 65 and 69 to take the lead into the weekend and had a 4-stroke lead into the back nine on Sunday before a collapse and shooting 80 to finish 15th. The 27-year-old Northern Irishman was No. 1 in the world in 2015, and now he enters his 9th Masters as the World’s No. 2 ranked player and fully recovered from a fractured rib that kept him out of action through February. In his last 8 stroke play starts, he’s finished in the top-10 seven times including his two tournaments in March. McIllroy is the complete package with his length and love of his new driver, and any windy or wet weather only adds to his chances. McIllroy has finished top-10 in each of his last three Masters, and he’s a top choice to complete the career grand slam with his 1st Masters victory and 5th major championship win. 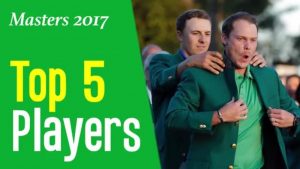 Jordan Spieth: A top contender for certain with a Masters profile of 3 starts, 1 win and 2 runner-up finishes. Most recently, he’s the closest player to win at Augusta in his first start (2nd) since Fuzzy Zoeller in 1979. Last year Spieth held a 5-shot lead on the back 9 Sunday at Augusta before dunking two balls in the water on the short Par 3 12th hole (155 yards). Amen Corner is where the fun begins and pressure mounts on Sunday, and while Spieth imploded last year and finished 2nd, he’s also got the game and elite iron play to get the ball closer to the pins. His premier putting completes his profile to finish strong again and he has played well much of 2017.

Dustin Johnson: DJ is the current No. 1 player in the world and has won each of his last three events. He tied for 4th at the Masters last year and was 6th in 2015. Prior to that, he had just one top-20 at the Masters in five appearances, showing a similar trajectory to McIllroy playing at the Masters and the significance of experience playing at Augusta. Johnson’s putting has improved and his confidence is at an all-time high with current form and last year’s U.S. Open victory.

Jason Day: We may look back on Day as a value play should he win, but we have to fade some of these guys and Day’s form, mental state and off course issues (mother) suggest he’s not his best as the world’s current No. 3. He’s a complete player with the length to excel, and his record at Augusta is strong with a runner-up on debut in 2011, a 3rd place finish in 2013 behind winner Adam Scott, 20th in 2014 and 10th last year when he entered as the No. 1 player in the world.

Rickey Fowler: Some solid form including a win at the Honda Classic and 3rd last week in Houston. But the small-statured Fowler fits the profile of an over-rated contender with a 5th place finish in 2014 his only top-10 at the Masters in six appearances at Augusta. Fowler missed the cut in 2016 and shot 80 in the opening round. 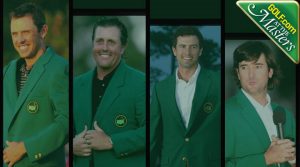 Hideki Matsuyama: No. 4 in the world, elite iron player with length, and a 5th and 7th place finish in his last two Masters starts in 2015 and 2016.

Henrik Stenson: No. 5 in the world and a major champion at last year’s Open at Troon, but he and Augusta are not a great match. Not a single top-10 finish in 11 starts.

Justin Rose: Three top-20s in his last four PGA events including T4. Rose is a top European PGA pro and an Olympic Gold Medalist (2016), Major Champion (U.S. Open, 2013) and runner-up to Spieth in the 2015 Masters. He tied for 10th last year at Augusta opening with a 69 in windy conditions while changing to a claw putting grip just weeks prior. Rose’s Masters record is strong with 7 top-20s in 11 starts.

Adam Scott: The skilled Aussie won the 2013 Masters and was 8th and 2nd at Augusta the two years prior. A total of 6 top-20s in 15 Masters starts. Strong early season form with 5-straight top-15s, but missed cut last week at Houston.

Sergio Garcia: Still without a major win nearing 20 years on tour. But Garcia has won 30 times worldwide with 9 PGA Tour victories. He’s seemingly on top of his game, putting has improved, and his iron game and proximity still rate very strong. In 18 Masters appearances, Garcia has 3 top-10s with a T4 best in 2004.

Paul Casey: Top-6 in each of the last two years at the Masters, and three other top-11 finishes at the Masters. Putting has been the problem holding the Englishman back, but form is good with 3 top-20s in his last four events.

Bill Haas: A FedEx Cup champion, Haas is dependable and has made the cut in all seven of his Masters starts with 4-straight top-25 finishes. Some solid key stats to support this season make him a big long shot with better value than so many others. 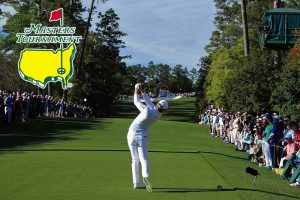 Louis Oosthuizen: A major champion (2010 Open) and runner-up in the 2012 Masters. Oosthuizen has 3-straight top-25’s at Augusta the last three years. Putting can be concern, but good form and great ball striker with super swing.

Bubba Watson: 2-time Masters champion but outside the top-35 each of the last two years and not up to par this season.

Brandt Snedeker: Great putter, Sneds finished 3rd in the 2008 Masters. He also has 4 top-20s in his last six Masters starts including T6 in 2013.

Matt Kuchar: No major wins, but still a strong player and 3-straight top-10’s at the Masters from 2012-2014. Good early season form but missed cut last week at Houston.

Tiger Woods: For all the suckers who bet on Woods at 50-1 or even 100-1 in Las Vegas (February) to win the Masters, know his withdraw is a lost bet. The majority of sportsbooks do not refund futures bets on golfers who withdraw before the tournament, but the LVSuperbook does.

Other big long shots that could play well and surprise including first timers*:

In selecting a winner, consider this example. Say I gave you $200 to bet on the Masters, and you had to wager 40% of it ($80) on one player with a total of six players and win bets. Who would be your top pick?  Mine would be McIllroy this year ($80) with a chance to cash in $640 at 8-1. He’s not the best value of the bunch, but I still rate his chances of winning stronger than others. The rest of the picks and pie distribution might look like this. 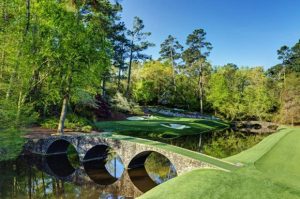 The point of the exercise is to show you that the long shots might be fun and enticing to consider, but the reality is most of them have a very little chance to win. The two I’ve included are stronger value plays in my opinion with a better shot to contend and win than many others at 50-1 or less. Still, you’re better off betting long shots of interest to finish top-10, top-20 or top-25 at lesser odds. If you’re going to wager on them to win, throw a few bucks on them but your risk is better spread above and in match-ups, finishing position and other player props. The enticement of a big score is nice perception, but not an odds-on favorite bet in reality. Note that 8 of the last 10 Masters winners were ranked in the top-30 in the world at the time they won and slipped on the Green Jacket.

Guys like Ricky Fowler (16-1) may get plenty of hype, but would you really be confident picking Fowler over McIllroy or Spieth if you had to place just one wager to win? Remember he had similar support entering last year’s Masters, and he then missed the cut. You might win a little more betting on Fowler, first-timer Rahm (23-1) or 3-time Masters champion Mickelson (30-1), but in this case, it’s not worth the return IMO as these guys like many other mid-range or long shots are not nearly up to par in comparing them to the top-ranked players when considering the course, form and history at the Masters.

The best match-up bets are not necessarily on the high-profile matches. But those garner the most action.

If you’re betting the big 3 match-ups of McIllroy, Spieth and Johnson, then I would look McIllroy’s way as an underdog (+110) to Johnson.

A favorable match-up of note is Justin Rose (-115) over Jon Rahm.

Enjoy ‘A Tradition Like No Other’ and the greatest golf event of the season. May your bets produce more birdies than bogeys as you shoot for the green at the Masters.