The college football 2023 national championship game and rematch has arrived, and the Georgia Bulldogs are a -13 point favorite over the TCU Horned Frogs. More leading online sportsbooks are dealing Georgia -13.5, and the total is 62 to 63 points.

I chip in a betting preview and pick in my coverage for Off Shore Gaming Association.

But if you take out Mattress Mack's $1 million bet on TCU +13, Georgia has nearly twice as much money to cover than TCU.

Read national championship game analysis and additional information you can bet on in my preview at OSGA.

ATS history favors TCU, as Playbook Sports newsletter notes than .750 or greater double-digit bowl ‘Dogs coming off a straight-up (SU) underdog win are 5-0 ATS the last 15 years. Bowl underdogs of more than 13 points are 7-0 ATS versus .900 or greater opponents the last 10 years.

Still, as one of my sports betting and content colleague’s and handicappers reminded me, four straight College Football Playoff national championship games have been decided by more than two touchdowns, and Georgia can be a Bulldog again and make it five. 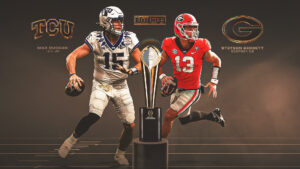