The 49th Annual World Series of Poker Main Event – poker’s World Championship with a $10,000 entry fee – starts July 2nd with three starting flights through the 4th of July at the Rio All-Suite Hotel & Casino in Las Vegas, Nevada. More than 7,000 players from at least 85 countries are expected to compete in the 2018 WSOP Main Event, a No-Limit Hold ‘em tournament which continues through July 14 with the Final Table starting July 12.

The most expansive video coverage in the event’s history is planned as well with both ESPN/ESPN2 and PokerGO blanketing the Main Event starting with Day 1 coverage.  ESPN/ESPN2 is expected to carry more than 60 hours of live coverage (with 30-minute delay on hole cards) on television and PokerGo will live web stream around the TV coverage daily. 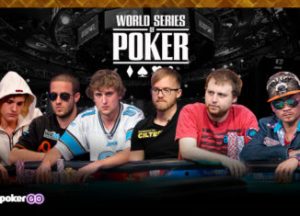 The Main Event is starting earlier this year to accommodate the coverage. Unlike in years past, the Main Event won’t be the final bracelet event of the WSOP. There are 13 events scheduled to start after the Main Event begins.

In 2017, a field of 7,221 players competed for almost $68 million in pokers richest annual tournament, and poker pro Scott Blumstein of Morristown, New Jersey was crowned the champion and won the whopping $8.15 million first place prize. In 2017, the WSOP drew 120,995 total entrants in 74 total events — the most in its history. The 2017 series awarded more than $231 million in prize money, and the events brought in players from 111 countries.

Those numbers are expected to be broken again during the 2018 WSOP, which has 78 bracelet events concluding with the $1 million No-Limit Hold ‘em Big One for One Drop starting July 15. Nine new events made their WSOP debut in 2018, and four of them start during the Main Event.

Poker professionals have won 32 WSOP Main Events and amateurs have won 16 of the 48 Main Events, including Chris Moneymaker, who in his very first live poker tournament went on to a remarkable win in 2003 to fuel the poker boom.

I played in the 2006 WSOP Main Event, and was featured in the local Las Vegas news as I was doing a daily sports handicapping radio show in Las Vegas and nationwide on SiriusXM satellite radio. I played in the Main Event again in 2009 and made a deep Day 3 run before falling just short of the money as I flopped an open-ended royal flush draw heads up and missed the draw but lost a good chunk of chips as I hit top pair of Kings on the turn. I won my way into those Main Event tournaments through satellite events, and there will be many stories told of bad beats, bad bets and missed draws as players try to beat the odds and their table opponents to advance through the 2018 Main Event.

For the third consecutive year in 2018, players will start with 50,000 in chips, and the WSOP Main Event will pay out 15 percent of the field instead of the long-held standard of 10 percent, a change implemented after players indicated they wanted a better chance to place in the money. But while a minimum cash of $15,000 is an admirable 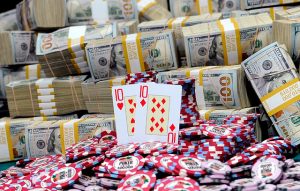 accomplishment, most players have their sites and dreams set on the final table with at least a $2 million pay day and a chance of making poker history as WSOP Main Event champion.

Levels during the Main Event are 120 minutes long throughout the tournament with 20 minute breaks after every level plus a dinner break. The small and big blinds start at 75/150 and antes begin at level 3. Players who survive five levels on day 1A, 1B and 1C return for Day 2AB on July 5 and 2C on July 6. The money bubble (top 15 percent of players) is expected to hit late in the evening of Day 3 on July 7. Remaining players continue playing daily to the Final Table starting July 12 with another World Champion crowned on July 14.