Nearly every hole Tiger Woods was striping it. Peyton Manning chipped in and played well as his partner. As Phil Mickelson sprayed it early and Tom Brady struggled even worse, the lead grew to +3 through 6 holes for Woods and Manning in The Match: Champions for Charity. 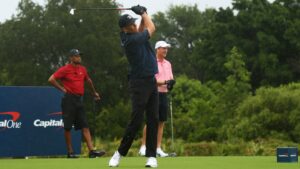 I previewed the made-for-TV event in an article at Forbes – Odds Favor Tiger Woods And Peyton Manning Victory In Champions For Charity Match.

I chipped in more at Vegas Sports Zone with information and insight on how The Match fit Tiger to a Tee. 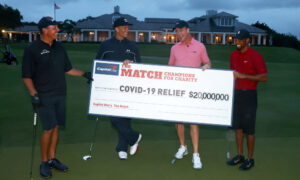 Photo by Ehrmann/Getty Images for The Match)

For a majority of fans that watched for sheer entertainment, the event met expectations despite the golfers playing through rain during most the event.

Following the event, all four players stood alongside a $20 million dollar check that was raised for COVID-19 relief efforts. WarnerMedia and the four superstars playing in the event donated $10 million, and another $10 million was raised during the match from online and text donations along with other pledges.

The Match was a Champions For Charity success. Even if UFC President Dana White didn’t follow my betting recommendations. Hopefully he contributed and donated well more than his $15,000 bet that lost.

Only @TomBrady could get me to bet on and watch GOLF!! Tune in at 3pm ET on TNT. Let’s kick some ASS @TomBrady & @PhilMickelson pic.twitter.com/o3VtDrKxh8

The success and popularity of the event should ensure future fundraising and charity events with pro athletes. The previous weekend started with the TaylorMade skins event featuring pro golfers raising funds for charities and COVID-19 relief efforts.

Woods and Manning were The Match winners. The Champions For Charity golf event was a huge win for COVID-19 relief efforts.