The sports story of the year is happening right here in Las Vegas, where the Vegas Golden Knights hit the jackpot for bettors and continue their remarkable run as an NHL expansion team. Vegas was not supposed to be this good, but the Knights enter post-Christmas play tied for first place with the Los Angeles Kings in the Western Conference Pacific division. Vegas (23-9, 48 points) entered the holiday break leading the Western Conference in points percentage (.706) and haven’t lost in regulation since Dec. 1. The Golden Knights most recent wins over red hot Washington (8-2 in December prior to playing Vegas) and Tampa Bay (7 straight wins prior to visiting Vegas) improved the Knights winning run to 8-0-1 in their past nine games. 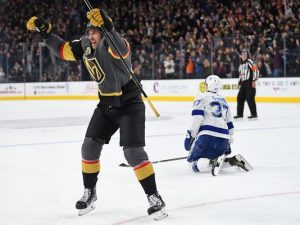 The Tampa Bay Lightning enter the final week of the year with the best record in the league at 26-7, and their 54 points is 7-points clear of New Jersey as the best in the Eastern Conference. But when Vegas scored with just 2 seconds remaining to jolt the Lightning for a 4-3 win Dec. 19, it sent a bolt of lightning through T-Mobile Arena in Las Vegas and gave the frenzied fans and players a taste of what the postseason life can be like next April when playoff hockey begins. The victories over the Capitals and Lightning has forged the Golden Knights reputation as NHL elite. That’s truly remarkable considering the expansion Knights were huge longshots to even make the playoffs prior to the season and making post season play would be an extraordinary accomplishment in itself for any expansion team.

Prior to the start of the NHL season the Golden Knights were offered as high as 300-1 to win the Stanley Cup. There was so much money bet in Las Vegas on the Knights to win the Cup that the MGM dropped their odds from 300-1 to 75-1 just prior to their first game at Dallas Oct. 6. William Hill opened Vegas at 150-1 to win the Cup, and the SouthPoint had the Knights 150-1 at the start of the season. The Westgate SuperBook listed the Knights at 200-1 and a majority of bookmakers in Las Vegas have a ton of liability on the Knights, with more tickets and money bet on the local favorite than any other team. Currently, the Golden Knights are near 20-1 at BookMaker, a leading offshore sportsbook. Some shops currently have Vegas as low as 8-1 to win the Stanley Cup.

Bettors are rushing to the counter to bet on the Golden Knights. “Golden Knights games have had a tremendous handle fo us,” Westgate SuperBook manager Jeff Sherman said. “Their games are 5-6 times (the amount bet) of any other NHL game on a given night.”

But the top eight teams in the Western Conference have between 40 and 48 points, and the playoffs are a little premature for Vegas even with their strong start now approaching midseason. That’s because the next ten games is probably the Knights toughest stretch of the season. Vegas’ schedule plays out like this over the next three weeks and their hot run may well turn a little colder on the ice as they play all winning teams and many of the league’s elite. If fact, a wager against Vegas every game is likely to produce some profit. 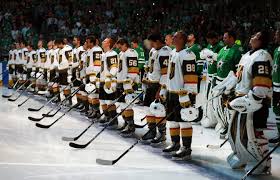 The All-Star game is a month away Jan. 28 in Tampa. While Vegas currently leads the league in money earned with more than 16-units of profit including a league-best home record of 15-2 and 12-units of profit at T-Mobile Arena on the famous Las Vegas strip, it’s just too difficult for any team and especially an expansion team to sustain a high-level of play over an extended period of time. Recall during the MLB season that the league’s best and hottest team, the LA Dodgers, even faded late in the season as we forecasted while losing 16-of-17 games starting in late August. The Knights also play their first six games following the All-Star break on the road against winning teams, which will be another tough stretch to add to their upcoming trouble spots.

But back to the story and show since we’re dealing with Vegas, the Knights are truly writing more than a chapter in their debut season. When you break down the stats and even go under the hood, the Knights performance and production is Golden and legit. They have a balanced attack with efficient puck-moving defensemen. The analytics show the Knights are a top-6 defensive team and top-10 offensive team. Now 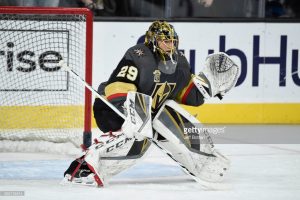 consider that Vegas has had to play four different goaltenders due to various injuries with three going in injured reserve including their star goalie Marc-Andre Fleury to a concussion in mid-October. The goaltending was a concern and not very good during November with fourth-stringer Maxime Legace between the pipes. The Knights went 5-6 during that stretch. But Fleury’s return to the lineup two weeks ago and the comeback win over Tampa Bay followed by the shutout against Washington shows the team’s confidence and cohesiveness with a determined will to win. Add in discipline and desire while ranking top-10 in fewest penalties taken since early November and it’s been a remarkable winning run for a team put together and encouraged by GM George McPhee and coach Gerard Gallant.

Vegas remarkable run has included becoming the first franchise in the 100-year history of the NHL to win eight of its first nine games during its inaugural season. The most wins in a season by an expansion team is 33 by both Florida and Anaheim in 1993-94. The 1925-26 Pittsburgh Penguins are the only expansion team in NHL history to finish with at least a .500 record. The Golden Knights currently have 23 wins and 48 points and are on a pace to exceed 50 wins and 112 points. Frankly, that’s beyond belief. Looking ahead to a possible playoff position, over the past four seasons, the eighth-place team in the Western Conference has averaged 92 points. 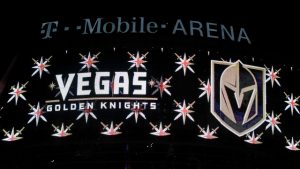 The Knights are also tied with most games (21) going over the total while ranking No. 3 in league scoring at 3.44 goals per game. Vegas has brought a double-time pace to their games and that was always going to be the plan under coach Gerard Gallant. The Golden Knights are enjoyable to watch because they are always pushing the tempo, pressuring the puck and attacking.

The accolades are deserved, but if you’re in the market of buying low and selling high while also evaluating the Knights upcoming schedule, it may be time to cash in your chips and profits on Vegas or start to play the don’t pass line. The hot roll of the dice on the Golden Knights is likely to end and crap out over their next 10-12 games with eight of them on the road. We’ll update again following the Golden Knights six-game road trip after the All-Star break. But as fun and profitable as the winning run has been, the Knights are embarking on some tough travel and opponents ahead, and there will be some cross-checks and dents in the Knights armor by the time Valentine’s Day arrives and the fairy tale becomes reality in Vegas.