Top Picks And Projections For Open Championship At Royal Portush

Beyond the favorites at the Open Championship, these longshots are capable contenders

Here is a preview of the 2019 Open Championship I provided at Offshore Gaming Association, along with odds, players, projections and picks. Some worthy favorites at the top of the betting market, while others are overvalued. 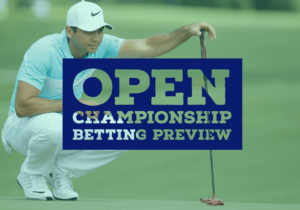 I also chipped in some insight and analysis on capable contenders as longshots that can finish in the top-10 or win in my article at Forbes.

Here’s a preview on two of the players I analyzed, and match-up picks.

Henrik Stenson: Top-5 Finish (+600). Patience, precision and proven performance make Stenson another contender to go well at the Open. He won at Troon in 2015 in the epic match with Mickelson with the two of them well out in front of the others. Elite iron play, ball striking and accuracy make him one of the games top links players, and he’s made the cut in 10 straight opens that also includes a pair of 3rd  place finishes and runner-up. Played well at Scottish Open last week finishing 5th following a top-10 at the U.S. Open, which has reduced his odds to win this week to 30-1.  Key Stats: Ranks No. 1 in Strokes Gained: Approach the Green and Top-20 in Strokes Gained: Tee-to-Green. Also, Top-40 Scrambling.

Hideki Matsuyama: – Top-5 Finish (+800). One of the very best on Tour from tee-to-green, he’s also his best making birdies ranking top-10 on Tour. That despite at times some putting problems. But Matsuyama is a much better player than his current No. 29 spot in the World Golf Rankings, having reached No. 2 in the world just two years ago after a near miss win at the PGA Championship. He’s won five times on Tour with eight other International victories, and while his Open results are not super strong, he has finished 6thplus another pair of top-20’s in six Open starts. Matsuyama has six straight top-25 finishes on Tour entering the Open and has not miss a cut this season. He’s another longshot that’s more than capable of breaking through and is also a bet at 40-1 to win his first major at Portrush and I’ve added him to my tournament match-up bets. Key Stats: Ranks top-3 in both Strokes Gained: Approach the Green and Tee-to-Green, and Top-10 Scrambling.

Looking to bet on a favorite? Try Jon Rahm in your tournament match-ups over Tiger Woods and Dustin Johnson.