The NFL playoffs kickoff on Jan. 4 with a pair of AFC games. I’ve provided picks and predictions and prop bets at PlayPicks between the Titans and Patriots (-5), along with a Wild Card betting preview with odds and analysis at TheLines. 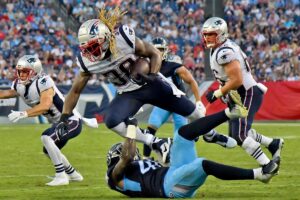 I also added an article at Forbes on the Titans and Patriots match-up as the Patriots enter the playoffs as a longshot to repeat as Super Bowl champions.

After further review, I added a first half UNDER 21.5 between the Titans and Patriots, and you can read more about understanding the Patriots and an NFL Playoff Strategy Guide on each team including Sunday’s key NFC match-up between the Vikings and Saints.

NFL Super Bowl odds on all 12 teams as the 2020 playoffs begin, along with exacta props from William Hill Sportsbook on which teams will meet in Super Bowl LIV (54) with odds to win each match-up.

Which outcome are you taking?