August has arrived and football season is just a 3rd and 5 completion away from moving the chains. NFL training camps are in full pads and preseason football is ready to kickoff starting with the Hall of Fame Game Aug. 1 followed by the first preseason games the following week. While many star players will take few, if any, snaps during preseason, others will be trying to impress their teammates and coaches to earn starting positions and roster spots. That includes quarterbacks, and there are some starting QB spots to be settled.

The Hall of Fame game will showcase the Denver Broncos against the Atlanta Falcons, but it will not feature Falcons quarterback Matt Ryan or new Broncos quarterback Joe Flacco. The former Ravens QB will not play. Instead, the Broncos will start 4th year journeyman QB Kevin Hogan. Rookies Drew Lock and Brett Rypien will follow as all three make their Broncos debut.

While those Denver quarterbacks battle through came for the backup position and roster spot, three teams have starting quarterback competitions worth watching – and wagering. As teams practice and prepare for the season opener in early September with the first Sunday games on Sept. 8, these three teams in particular, Washington Redskins, NY Giants and Miami Dolphins, are looking for the most dependable starter and leader to take their teams to greater success. As you watch the competitions unfold, you can also get involved in wagering on these quarterback competitions with starting spots to be determined. Some of the leading online sportsbooks have posted various prop bets not only for the regular season, but also on select quarterback competitions.

SportsBetting.ag (@SportsBettingAG) has set odds for three quarterback competitions in the NFL. The odds are for which player will be the starter in Week 1 of the regular season.

It’s no coincidence that these three teams are all longshots to not only get to or win the Super Bowl, but also to make the playoffs.

At Caesars Palace and Caesars Entertainment properties in Las Vegas, the Dolphins (5/2), Cardinals (7/2) and Giants (9/2) are the favorites to be the teams with the fewest wins during the 2019 regular season followed by the Raiders (15/2), Bengals (11/2) and Redskins (9-1). The Cardinals are expected to start rookie No. 1 overall pick Kyler Murray at quarterback to start the season.

Also, the odds of these teams making the playoffs are:

The odds are going to change as the players perform, and if an injury occurs to a quarterback, you’ll see the odds taken down. But as you read more from team reports and watch player performance, you’ll potentially glean some information that will allow to you wager and get a price more favorable.

“It’s pretty clear to me that Ryan Fitzpatrick is leading the way,” Dolphins’ Brian Flores said Tuesday. “He’s done that in a lot of areas, from leadership to production on the field to the meeting rooms to the walkthroughs. This is an ongoing competition, but right now he’s leading the way.”

Fitzpatrick, 36, was signed by the Dolphins in March after they traded away Ryan Tannehill to Tennessee. Fitzpatrick is playing for his 8th team in 15 NFL seasons, and is showing his experience and leadership in camp after Miami signed Josh Rose in April in a trade with Arizona. 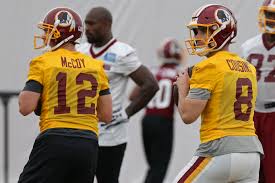 The Redskins QB competition is the most competitive. Case Keenum may have the early lead in his debut season with the Redskins, but Colt McCoy is sure to make a strong push to be the Week 1 starter and has stood out as a legitimate candidate to win the job. McCoy played in three games for the Redskins last season as a backup while starting two contests after Alex Smith suffered a broken tibia and fibula. Then two weeks later on Dec. 3, McCoy suffered a broken fibula to end his season after going 4-of-4 passing for 50 yards before his injury against the Philadelphia Eagles.

Here is an important consideration regarding the Redskins quarterback situation, and why I would not bet on rookie Dwayne Haskins to be the Week 1 starter even as he earns rave reviews in the opening week of training camp. Washington’s opening month regular season schedule is brutal and all against top-tier defenses. Week 1 at Philadelphia. Week 2 vs. Dallas. Week 3 vs. Chicago (Mon), Week 4 at NY Giants. Week 5 vs. New England. Three division games in the opening month with the first three contests in particular against stronger defenses.

That’s not the way Redskins head coach or management wants to break in their prized first round rookie quarterback, who will be better served watching and learning. One of the other veterans will give the Redskins a much better chance to compete and win, and after some struggles of their own against strong defenses, the fan base among others will be calling for Haskins to take over. I wouldn’t count on Haskins 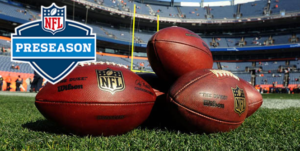 being too productive even when he gets the opportunity to play or start in his first season, which could come in Week 6 at Miami. If he’s not quite ready to start or the Redskins are winning more games, then perhaps Haskins sits until after the Redskins bye week in early November and takes over at home against the Jets on Nov. 17 – when Washington is out of the playoff chase. Time will tell, and Haskins could surprise. I wouldn’t bet on it, but watch his performance in preseason and also Keenum and McCoy, and get your bets in on Colt if you anticipate he’ll hook ’em. McCoy will likely get a chance to start preseason Game 2 and might not give the starting job back. Have to believe coach Gruden is on McCoy’s side and will lean his way initially if all quarterbacks are close to equal.

The Giants QB competition is not likely to produce a new starter, but you can bet on Eli Manning, 38, to hold off the challenge of rookie first round draft pick Daniel Jones. The price is steep on Manning, laying $1,000 to win $100. But if you believe Jones can follow this 5-step plan to unseat Eli, then perhaps you will call Jones’ number and set up a screen pass. Or just get sacked with Manning, who many will not back with their money, or others. However, running back Saquon Barkley is a good bet to break loose for another big season following a Rookie of the Year and Pro Bowl season. Barkley is +650 at Caesars properties (Caesars, Bally’s, Paris, Flamingo, Harrah’s, Rio, Cromwell, Planet Hollywood) to win the regular season rushing title; a likely outcome if he can avoid injury and play at least 14 games.

Just three NFL quarterback competitions to bet on for Week 1 starter is not ideal, but there is at least 20 QB competitions in college football, plus many more wagering options and props to bet on at SportsBetting.ag. We’ll try to tackle some of those QB’s in competition and sack the Bookmaker in the weeks ahead looking to produce more profit following a 35-19 ATS season in 2018 selecting NFL underdogs.