New Jersey and other States to Benefit from Sports Betting Case

If you’re a sports bettor, Dec. 4 is a big day. And if you’re in the horse racing industry, especially in New Jersey, a lifeline is being thrown your way. The U.S. Supreme Court is scheduled to hear oral arguments in a case that could legalize sports betting across the country.

The case is Christie vs. NCAA, and it involves the Professional Amateur Sports Protection Act (PASPA), passed in 1992, which prohibits sports betting nationwide except for four states: Nevada, Montana, Delaware and Oregon.  At the core of the debate is whether PASPA

violates anti-commandeering doctrines in the Tenth Amendment, which mandate that the federal government cannot require some states to enforce a regulation that others are exempt from.

The Supreme Court decided in June to hear the case, Christie v. NCAA, and set the date for Dec. 4. “Christie” refers to New Jersey Gov. Chris Christie, and the case is an attempt by that state to overturn a lower court’s ruling that blocked an attempt to legalize sports betting in the Garden State.

A ruling is not expected for months after the arguments — likely in the spring, possibly as late as June, 2018.

But racetrack and casino operators are so confident that they’re already making preparations. 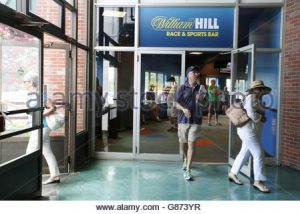 That includes Monmouth Park, which already has a sports betting lounge in a $1 million partnership with British bookmaker William Hill, who also operates in the United States. It’s currently operating as a race and sports bar, but the lounge can be up and running with kiosks and tellers within weeks of the Supreme Court decision. According to Monmouth Park CEO Dennis Drazin, there are also plans to expand the lounge into the grandstand and open a full-scale Las Vegas-style sportsbook.

That means there would be no state regulation. The tracks and casinos would create their own regulatory process instead.

Such a scenario, Wallach said, would likely “carve out an East Coast monopoly (on sports betting) for New Jersey until Congress changes the landscape.”

The Borgata casino in Atlantic City, an MGM resorts property, is already preparing for the expected changes in sports betting laws. It announced in mid-November that it will soon begin construction on a $7 million sports book.

Legal sports betting would be boon for the casinos, and also give a significant boost to New Jersey’s horse-racing industry, which has been struggling in recent years after losing state subsidies.

“Sports betting for us is survival here at Monmouth Park,” the track’s CEO said.

Vegas Sports Media is an affiliate of Vegas Sports Zone and provides articles, info and insight with analysis to educate, inform and entertain sports and gaming fans.