As the 2019 NFL Season Kicks Off, Bettors Get Behind Browns And See Super Bowl in Site

The 2019 NFL season is set to kickoff, and the Cleveland Browns have become the most popular bet to win the 2020 Super Bowl. That’s right, the Browns, who just two years ago were on a historic 1-31 losing run with Cleveland’s clueless coach, quarterback, personnel and management decisions drawing the

wrath and comedy of comments from fans and media across the NFL. That included from bettors, who were in disbelief watching the Browns invent new ways to lose.

The percentage of bets and amount of bets various across most sportsbooks, but the Browns upgrades and improvements make them a most popular play this year. Cleveland’s season win total is 9, and the Browns are a -5.5 point favorite in Week 1 at home against the Tennessee Titans.

There is more NFL futures odds, division favorites, MVP and other news in my article at osga.com.

The Westgate SuperBook in Las Vegas has the following Super Bowl odds as the 2019 season begins this week.

You can see the importance of shopping for best lines and futures odds, and some of the regional bias at different sportsbooks in various parts of the country. The Raiders, who move to Las Vegas next season, are just 40-1 in Las Vegas at the SuperBook. At FanDuel Sportsbook in New Jersey, the Raiders are 100-1 to win the Super Bowl, while the Giants (80-1) and Redskins (100-1) have lower odds but still longshots. 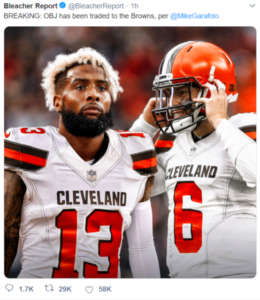 Who are this year’s surprise teams? Remember, the Bears were at least 100-1 to win the Super Bowl at the start of last season, and went from a 5-win team to NFC North champs and 12 wins and the playoffs.

The Browns look to be a playoff contender and a popular play, and based on seasons past are a non-playoff team that can challenge for this years playoffs. That’s assuming QB Baker Mayfield stays healthy and improves on his strong record setting rookie season of 2018 (27 TD passes). He’ll have a great chance with new Browns WR Odell Beckham joining Jarvis Landry, and RB Nick Chubb now the Browns full time running back. If Mayfield goes down, backup QB Drew Stanton would be plenty serviceable. But as BetOnline recently revealed its QB ratings and effect each starting quarterback has on the point spread, the impact on the betting line from Mayfield to Stanton would be 4 points.

We’ll see some surprise teams make the playoffs that were not expected to beat out many of the ‘experts’ selections as division winners and playoff contenders.

I’m not picking or betting on the Browns to win the Super Bowl (yet), but I do believe the Browns break through and make the playoffs this season.