The 2020 NFL Draft played to form in the top 10 picks before a few ‘upsets’ and plus price winners came in. Player market moves and betting odds showed chalk bettors cashing in early with little suspense in the top-4 picks. Then QB’s Tua Tagovailoa (Dolphins) and Justin Herbert (Chargers) were picked No. 5 and No. 6 which were popular bets at sportsbooks like William Hill. and those that followed VSiN’s Betcast in my coverage for Forbes and in TheLines NFL Draft Betting Guide. 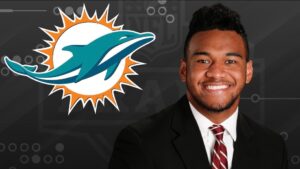 Quarterbacks you can bet on as I outlined in Forbes drew the most interest and betting action, and Tagovailoa’s draft position closed at 3.5 at William Hill, and more than 65% of the tickets and money wagered cashed in on the ‘over’. Miami (-150) was the favorite to pick quarterback Tua Tagovailoa, who sportsbook director Nick Bogdanovich of William Hill told me was”drawing the most interest and bets.”

NFL viewership soared to a record high 15.6 million across the network and digital channels. Wagering on the 2020 NFL Draft was at an all-time high with a record number of props offered.

Bogdanovich sent me an email saying, “the handle of course was way larger than previous years.” Nevada gaming approved wagering on the NFL Draft starting in 2017, and William Hill was “a small loser in Nevada and a small winner in New Jersey,” in Round 1 according to Bogdanovich, who said William Hill “won all wide receiver props and lost all conference over under bets.”

Circa Sports in Las Vegas took their first-ever NFL Draft bets as a new operator this past year. Sportsbook manager Chris Bennett sent me a note and said the handle was “respectable, and we ended up a small winner.”

Bennett noted the NFL Draft can be difficult to book and that “some of the line moves from opener to closer were enormous.” That’s too be expected when booking props on players and more unknowns. The challenge and risk is greater with “more sharp bettors making bets” and on top of any discrepancies in props and odds.

Circa Sports got sacked by the new hometown team when the Las Vegas Raiders drafted wide receiver Henry Ruggs No. 12 overall. “That hurt us,” Bennett said, as the Raiders first pick prop went against the sportsbook.

Circa Sports, William Hill, Caesars and MGM are the four operators in Las Vegas and Nevada offering  wagering through a mobile app for the NFL Draft during the casino’s shutdown due to COVID-19. MGM and Circa are taking bets on the NFL Draft for the first time this year.

The Round 1 draft picks chart includes some of the over/under props offered at William Hill.

Over/Under odds adjusted and moved more in the days leading up to the NFL Draft. Not all players drafted had props offered. 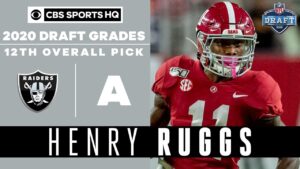 Overall, there were six wideouts picked in the first round, with 58% of the total dollars wagered coming in on over 5.5 at William Hill.

Read additional betting info, Round 1 recap and props updates in my article at Offshore Gaming.