Preview and Odds for the 100th PGA Championship at Bellerive CC in St. Louis

The final major of the season is the PGA Championship, which will be played for the last time in August as it’s moved up to May starting next year. The field includes 108 of the top 111 in the latest Official World Rankings. The field also includes 20 PGA club professionals who qualified for the championship. A total of 16 past PGA champions are in the field including 4-time winner Tiger Woods, who is apparently dealing with some inflammation in his back and body and has been taking ice baths.

St. Louis has had record temperatures in June and July, and the weather during this year’s tournament is expected to be very hot and humid opening in the low 90’s Thursday. Tuesday had stormy weather and delays in practice rounds, and the course was wet, soft and muddy. The best chance of rain and scattered thunderstorms during tournament play is Saturday (60%). 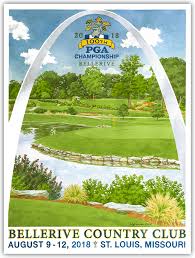 Tiger Woods says he expects the course to remain wet despite the heat. If so, players that hit the ball higher and long should benefit as there won’t be as much roll on tee shots. The course will play very long, but accuracy is also important, as the rough is very penal. The huge, undulating putting greens are scorched and a bit patchy in spots, and the bentgrass greens are slower than normal with multiple contours, but will have a bit more speed during tournament play. Still, soft and slower greens should make for lower scores, even with some tougher par 4’s with six of them playing greater than 450 yards.

Current form is always something to consider when evaluating players, and certainly course form where it applies. At the Open last month, winner Francisco Molinari was in tremendous form prior to the event and even took some win money dropping to near 25-1 by tournament time. Yet Justin Thomas, who missed the cut at the Open to allow us to cash in on tournament match-ups against him, showed that placing too much emphasis on a single event or a few off weeks can have pitfalls. Thomas rebounded last week with a victory in the WGC Bridgestone event at Firestone. Now he’ll try to defend his title at the PGA Championship. 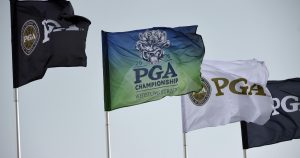 Recent history shows us that four of the last six PGA champions played in one of the last two groups the week before in the event at Firestone CC. Whether it’s good form and good play the week prior, or that the better players are rising up in a big WGC event and carrying over strong play at the PGA is something to consider. Especially when the four players in the final two groups were Thomas, Day, McIllroy and Poulter – three past PGA major champions.

Robert Trent Jones designed both Firestone and the classic Bellerive CC, which was redesigned by his son Rees, who changed every hole, redid the fairways, reshaped the bunkering and rebuilt all the greens.

The best iron players and ball-strikers will be some of your best bets this week, and with sharp falloffs on the greens, well-placed approach shots will be rewarded while wayward iron shots will still leave up-and-over recoveries. 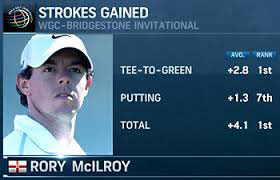 So Strokes Gained: Approach-the-Green is a key category to review and focus on, and putting stats are more important than scrambling and chipping this week. The greens are so large that some are greens within greens or quadrants, and missing to the wrong spots will results in more three putts than normal.

Who will hoist the Wanamaker Trophy?

The Players and Odds

Little value on the marquee players, who are listed here just to note the favorites in the event. Shop the leading online sportsbooks for best prices, especially longshots of interest:

Dustin Johnson is tops of all favorites in combined Strokes Gained: Approach-the-Green and Strokes Gained: Putting. He’s also top 5 in proximity to hole. Johnson will have even more crowd support this week with fiancé family ties to the area and Wayne Gretzky bringing out extra friends to support. Johnson looks best of the favorites bunch. McIllroy should thrive as a big hitter and one who loves soft golf courses. Reading into his interview this week, he’s still not completely his best with his swing and short iron game, but a favorite to consider in more even match-up prices.

Other contenders at a price:

We’ve done well in the first three majors this year, cashing more tournament match-up bets with one of our best majors ever in the Masters. We did well in the U.S. Open and chipped in another match-up winner on these pages in the Open Championship during a winning week.

Winning score over/under is 266.5, which is 14-under par. I pass for now until I see more weather from Wednesday and read more players comments. However, soft conditions suggest plenty of scoring. You can bet on it.