Here is a weekly article I provide for TheLines with some insight into the betting market moves and advance look-ahead lines for NFL games including Week 7.

The Westgate SuperBook in Las Vegas provides the advance look-ahead lines each week for the following weeks games, and PointsBet has joined FanDuel Sportsbook in New Jersey to provide their advance look ahead lines.

Review the Week 7 look ahead lines below, and understand the tendency for many bettors is to over-react to previous weeks scores and results. The look-ahead lines provide a sense of stability from the linemaker, who is unbiased in setting the lines in advance without the information from the current week’s contests. 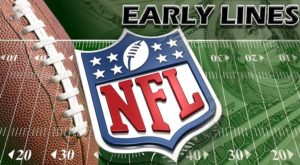 Bettors can also gain an edge or find value in the lines once the current week’s lines are released. They do this based on not only a potential overreaction to the recent week’s results, but by using information they have on teams, including NFL power rankings. Making adjustments is part of the process, along with formulating an opinion and whether they are a believer in some teams or not in others. This can be based on personnel, injuries, situations, stats or angles they want to apply as the season progresses.

Also in the recency report, I add some insight on current Week 6 market moves with some storylines to follow and analysis.  I also add some (meaningless) NFL trends information for Week.

The biggest line adjustment in Week 6 from the look-ahead line is on the Patriots, who are up to -16.5 at FanDuel Sportsbook and -17 at DraftKings Sportsbook. The Ravens have also seen a three-point upward move from the look ahead line with Baltimore now a 11.5-point favorite over winless Cincinnati. The Browns were a 3-point favorite on the advance line last week, but following a poor performance Monday night along with Seattle’s extra rest and preparation off a win last Thursday, the Seahawks are now a 2-point favorite.

To listen to my weekly thoughts and insight on TheLines weekly sports betting podcast, check out Episode 73 as we talk about the week of news in NBA, MLB, CFB and NFL action.

Here is a NFL Week 6 betting guide with game analysis as you evaluate the lines, match-ups and current weeks’ games.