NFL Inside the Numbers Week 16

Following back-to-back record scoring in weeks 14 and 15 with 53 and 52 PPG, totals came back to the norm last week as over/unders went 5-11 with an average of 43 PPG scored.  We enjoyed the lower-scoring games as our Top Plays went a perfect 3-0 including two under the total winners in the Jets/Browns and Seahawks/Cardinals game.  The SEA/AZ game was a Top Play Big Bertha winner, and we nailed another Big Bertha long and straight with our NFC GOY winner on the Eagles over the Bears, 54-11.  As expected, the rushing guidelines played out perfectly in the Eagles huge victory as the depleted Bears defense was gashed again allowing 289 rushing yards to the Eagles, and Philadelphia posted week high’s in total yards (514) and yards per play (8.2). 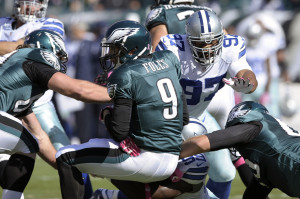 Week 16 NFL Favorites went 11-5 straight-up (SU) and 8-8  against the spread (ATS); I graded the Packers and Patriots as slight favorites, although line moves again crossed over pick ’em.  Using my lines favorites are now 163-76 SU and 119-112-8 ATS year to date pending the lines used and movement.   Over/under totals were 5-11 in week 16.  Using our grade, totals are now 123-109 O/U YTD  (I’m leaving out pushes).  Weather impacted some totals moves again and I encourage you to continue to take an advance look at the weather and make your wagers accordingly if you feel weather may impact scoring.

Betting and beating the NFL over the long-term involves an understanding of the match-ups, situations and stats, and how to apply them for success. But even when you handicap the games correctly and they even play out statistically as planned, you’re wagers can go up in smoke due to bad calls, unforeseen injuries, dropped balls and of course Turnovers, as TO’s will always have an impact on NFL games and especially against the spread (ATS). The Chiefs, Vikings and Ravens all suffered four turnovers and a (-3) or greater TO differential in week 16 SU/ATS losses.  Surprisingly, the Cardinals had 4 turnovers, a -2 TO differential but managed to win at Seattle, 17-10 in one of the biggest upsets of the season from a point spread perspective.   Teams that are +3 or more in the turnover column are now 37-3 ATS his season.  Teams that are exactly +2 in the turnover column in a game are 48-11 ATS this season including 37-4 the last eight weeks

The Dolphins (14/12), Giants (33/17), Bucs (59/23), Raiders (59/17), Bears (61/19), Falcons (61/20) and Jaguars (63/21) struggled to get their ground game going in defeat.   While the game flow, situations and score can impact a team’s game plan and use of the running game,  it’s proven over and over, season after season that teams who fail to commit to the running game or lack consistency in the ability to run the ball and control the ball, clock and chains are more often on the losing side of the ledger, both SU and ATS.

Here are the ATS records of teams that fail to run the ball 20 times or less in a game and those teams than run the ball at least 30 times in a game.  Yards per rush is not as important as controlling the ball, clock and chains. Having a quality or top-tier QB helps, but review these running stats again and use them in your handicapping to see if you can determine which teams will have success running the ball and/or stopping the run each week and which teams will commit to controlling and running the ball.  Research injuries and their impact on both the running game/stopping run and potential match-up edges in the passing game.

Through week 16 games, teams that run the ball 20 times or less in a game are a combined 18-85 (17%) ATS this season.  An unusual week 15 saw four teams run the ball 20 times or less and cover ATS.  Six others failed ATS for a 4-6 week, but to see the NY Giants pull out a SU victory in overtime at Detroit is surprising considering the stats.  New York had just 33 rushing yards on 17 attempts while the Lions rushed for 148 yards on 36 attempts.  The Giants had just 202 total yards, 12 first downs, but the Lions suffered 3 more self-inflicted turnovers to eliminated them from the playoffs after leading the division the past two weeks.   Teams that run the ball at least 30 times per game are 113-32  (78%) ATS this season following a 9-5 week (not including games where both teams run the ball 30+ times).

We’ll review more NFL Inside the Numbers stats and information each week as we continue to evaluate the results, match-ups and work to become even more proficient in point spread prognosis.