NFL Inside the Numbers Week 15

Week 15 NFL Favorites went 10-6 straight-up (SU) and 7-7-2 against the spread (ATS); I graded the Dolphins as a favorite in a big move despite Miami being an underdog right into Saturday.  Using my lines favorites are now 152-71 SU and 111-104-8 ATS year to date pending the lines used and movement.   Over/under totals were 10-6 in week 15.  Using our grade, totals are now 118-98 O/U YTD  (I’m leaving out pushes).
Be sure to check week 16 weather forecasts as there is at least a 50% chance of rain in the early Sunday forecast in Buffalo, Washington, Philadelphia, New Jersey (Jets), Cincinnati, Baltimore and Green Bay, where it will be cold with 70% chance of snow. 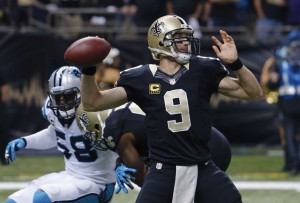 Betting and beating the NFL over the long-term involves an understanding of the match-ups, situations and stats, and how to apply them for success. But even when you handicap the games correctly and they even play out statistically as planned, you’re wagers can go up in smoke due to bad calls, unforeseen injuries, dropped balls and of course Turnovers, as TO’s will always have an impact on NFL games and especially against the spread (ATS).  Week 15 had some big turnover games and differentials as the Redskins (7 TOs, 7-2), Raiders (7 TOs, 7-1), NY Giants (5-1), Titans (3-0), Saints (3-0), and Lions (3-0) all coughed up the ball too often, and those teams went 0-6 SU.  Remarkably, the Redskins almost pulled out their game at Atlanta, but missed a 2-point conversion to win in the final seconds in a ATS win.  The Titans pushed on the point spread against Arizona despite their turnover troubles, although early bettors on the Cardinals won at -2.5.    Teams that are +3 or more in the turnover column are now 34-3 ATS his season. Teams that are exactly +2 in the turnover column in a game are 45-9 ATS this season including 34-2 ATS the past eight weeks.

Teams that struggled to get their ground game going in defeat included the Broncos (18/11), NY Giants (25/14), Buccaneers (39/12), Bengals (57/22) and Saints (61/20).   While the game flow, situations and score can impact a team’s game plan and use of the running game,  it’s proven over and over, season after season that teams who fail to commit to the running game or lack consistency in the ability to run the ball and control the ball, clock and chains are more often on the losing side of the ledger, both SU and ATS.

Here are the ATS records of teams that fail to run the ball 20 times or less in a game and those teams than run the ball at least 30 times in a game.  Yards per rush is not as important as controlling the ball, clock and chains. Having a quality or top-tier QB helps, but review these running stats again and use them in your handicapping to see if you can determine which teams will have success running the ball and/or stopping the run each week and which teams will commit to controlling and running the ball.  Research injuries and their impact on both the running game/stopping run and potential match-up edges in the passing game.

We’ll review more NFL Inside the Numbers stats and information each week as we continue to evaluate the results, match-ups and work to become even more proficient in point spread prognosis. Listen to my NFL Betting Podcast Week 15 posted early each week on Tuesday’s for more insight, analysis and sports betting information.  This week later Wed as I’m traveling.