A key division duel in the AFC South Sunday as the Colts (4-5) and Titans (5-5) try to stay in the division race behind Houston (6-3). The Texans have a tough game Monday in Mexico City versus the Oakland Raiders, but this game is also key for any wild card hopes that either of these teams have in the AFC.

The Colts enter off a bye and already beat the Titans this season. Tennessee played for the 11th straight week but enters off a pounding of the Packers last week 47-25 with a balanced attack. The week prior the Colts also pounded the Packers in Green Bay 31-26 as a big ‘Dog, while the Titans 43-25 loss at San Diego the week prior was partially the result of a 3-0 negative turnover differential. With six games remaining and more winnable games, Tennessee can make their run at the division title by beating the Colts and are a value play at +350 to win the AFC South.

Plenty of betting on this contest at the sports books as these two teams kick off week 11 action Sunday. 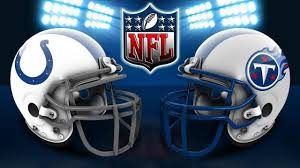 The Colts are 18-4 SU in divisional play with QB Andrew Luck under center, and Indianapolis has won 10-straight games over Tennessee (8-1-1 ATS). That includes 34-26 as a 4-point ‘Dog on October 23 when the Titans could not hold a late 23-20 fourth quarter lead. Luck shined for the Colts, passing for 353 yards and 3 TDs and over 9.0 yards per pass. Adding to the Colts positive profile is that Indy is 9-2 ATS off their bye week and the Colts are 12-1 SU in Tennessee’s last 13 visits to Indianapolis.

But the Colts have allowed more QB sacks than any team in the league, as Luck has been pressured often and the Colts running offers little support with below average stats at 98 rushing YPG and 24 rushing attempts per contest. That’s in contrast to the Titans strong ground game that ranks top-3 in yards, attempts and yards per rush (145/30/4.8). Mariota, the Polynesian Pride now ranks 5th in net yards per pass and  has tossed 21 TDs including 17 in the last six games as the Titans have come together to play their best ball averaging better than 33 points per game in their last six contests with 26 or more in each contest. The Titans have not been to the playoffs in seven years, and their defense is the better unit in this match-up and can continue to improve under veteran coordinator Dick LeBeau. 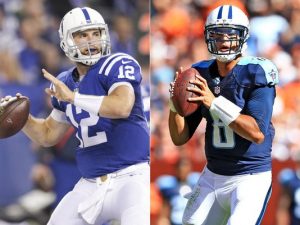 The Colts defense is among the league’s worst allowing 6.2 yards per play (No. 31) and 28 points per game (No. 30). The Titans allow 5.7 yards per play, and Tennessee’s defense is in the bottom quartile and we see both offenses having a solid shot to put up 400 or more yards in this match-up. Quarterback Luck will try to carry the Colts again in this contest as he did in the first meeting, when the Colts pied up 422 yards at Tennessee. The Titans are averaging 444 YPG in their last three contests which is No. 2 in the league behind the Raiders, and QB Mariota has averaged a sensational 11.2 yards per pass or more in two of those games with 9 TDs and 2 INTs in the Titans last three games.

These two teams have gong 8-2 and 7-2 over/under collectively this season, and this looks like another high-scoring affair. Despite the Colts series dominance, technical support and situational advantage off the bye, we’ll back the Titans and the over in an expected higher-scoring game.