Stats and Betting Results as Contenders Push for Playoffs into December

Another exciting week of football is in the books to close November following some key playoff impacting games in Week 12. The sports books took a beating on Thursday and early Sunday as betting favorites were off to an 11-0 SU and 7-2-2 ATS start with some close calls. It could have been the worst week of the season for the sports books had the underdogs not barked back. The ‘Dogs were 5-0 ATS late Sunday and Monday with three outright winners. That left the week record of favorites at 13-3 SU and 7-7-2 ATS with some games moving off numbers that affected the ATS results.

The Vikings (+2.5) couldn’t hold off the Lions late again, allowing a pair of field goals in the final two minutes following an interception to lose 16-13 in a key first place game in the NFL North Thanksgiving Day. The Cowboys (-7) feasted on the rival Redskins on turkey day too, winning their 10th straight game but failing to get the gravy for just the second time this season (9-2 ATS) in a 31-26 win. I rated the Jaguars (+8.5) a ‘Dog winner in their 28-21 loss at Buffalo in a game the Jags dominated early. The Bills opened -7 and we were on them early and teased the Bills too before Buffalo bettors sent the line up to as high as -9.5 on game day. 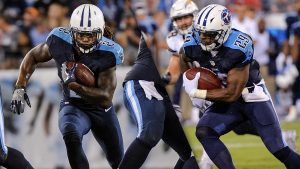 The Titans steamed from -3 to -6 when the Bears announced Matt Barkley as the starter at quarterback. I rated that game a push in Tennessee’s 27-21 road win. The Titans took a bit more money game day and closed 6.5 in many sports books, which cost late Titans betting backers. Tennessee led 27-7 in the fourth quarter, but the Titans had to hold on as Chicago had four cracks from inside the Titans 10-yard line in the final minute but couldn’t get the game winning touchdown. The Panthers (+3.5) also closed +3 in places in their 35-32 loss at Oakland in another exciting finish for the Raiders (9-2) in their magical season thus far. I rated that close call a win for underdog bettors. The Dolphins (-7) could not get the money despite leading the 49ers 31-14 and had to hold off a late San Francisco rally that was stopped just short of the goal line in the closing seconds in Miami’s 31-24 in. No worry for Atlanta bettors, as the Falcons flew over the Cardinals 38-19 in a battle of the birds, nearly eliminating Arizona (4-6-1) from the playoff chase while Atlanta (7-4) maintained their top spot in the NFC South. We had the Bucs (+6), and Tampa Bay pulled off the upset of the day and killed all teaser bets on Seattle as well in Tampa’s 14-5 win; the Bucs third straight win and cover to keep them in the NFC South and wild card chase at 6-5.

Close calls and fantastic finishes continued into Sunday night at Denver, as the impotent Chiefs offense rose to the occasion late to tie the game 24-24 late in regulation with a TD and 2-point conversion. The Chiefs then got the game-winning FG as time expired in overtime to move them to 8-3 and just a game back of division leading Oakland while Denver fell to 7-4 with more shuffling in the standings. In the most misleading stat line of the week, the Chiefs gained just 273 yards at 3.6 yards per play in five quarters of football but prevailed over Denver, who had 464 yards offense at 6.0 yards per play.

As we move down the stretch of the NFL season with teams pushing for the playoffs, I thought I would update some of the stats that I post weekly regarding rushing, turnovers and picking the winners in competitively-lined games.

If it were only this easy!