Early risers Sunday morning watched the Bengals and Redskins come alive in the 2nd half to deliver an over the total winner, but the two teams couldn’t settle the score in overtime to finish in a 27-27 tie.  The marquee Sunday night match-up had a big betting swing, as Eagles bettors were shot down with their solid underdog bet (+5) in a 29-23 overtime loss at Dallas. The Cowboys controlled the line of scrimmage and yards with a strong, balanced attack of 187 rushing and 460 total yards including overtime. But the Eagles had a 23-13 fourth quarter lead only to blow it 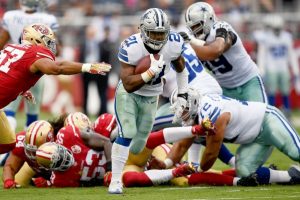 including the cover in overtime. Tough beat. That Cowboys win buried the bookmakers for a rare losing Sunday, but the public and favorite bettors gave plenty back Monday night when the Vikings (-5) fell flat at Chicago and lost to the bottom of the division Bears, 20-10. Another example of the swings in NFL betting and perception, as Chicago was embarrassed on national TV the previous Thursday at Green Bay, 26-10 with their own awful offense.

The Bengals missed chip shot field goal in overtime cost favorite bettors a push while the Falcons and Packers were tight the whole way in Atlanta’s (-2.5) win on a last minute TD pass by Matt Ryan, 33-32. Rogers and Ryan put on a passing clinic with 7 combined TD passes and zero interceptions. It’s refreshing and fun to watch top QB’s play the position with such skill and precision instead of watching some teams QB’s try to play a college style at times at the pro level. That just doesn’t work at the highest level to win championships.

The Bucs looked like they would pull out a fourth quarter win, but the Raiders rallied for a late TD in the final 100 seconds and QB Derek Carr continued his big day in overtime as Oakland kept their perfect road record intact (5-0) along with their dream season while dispelling the West going East travel myth. Carr passed for over 500 yards and receivers Cooper and Crabtree combined for over 300 yards as the Raiders won another thriller, 30-24 in overtime.

Beating the NFL over the long-term involves an understanding of the match-ups, situations and stats, and how to apply them for success. Let’s take a look at some of the stats of note from week 8, and use some of this moving forward in isolating match-up advantages.

NFL Inside the Numbers Week 8

In week 8, NFL favorites won for just the second week overall this season going 10-3 SU and 9-4 ATS. Some close calls each week with line moves, so there is some subjective data. That includes the Raiders (-1) who we rated the favorite in their 30-24 OT win at Tampa Bay. The Buccaneers went off as a 1-point favorite with some significant money on Tampa Bay right before kickoff. The Browns (+2.5) remained winless (0-8) in a 31-28 home loss to the Jets, and Cleveland was run over at the point of attack allowing 171 rushing yards on 35 carries. The Browns are a historically bad team, as are the 49ers, who had a much needed bye week. Those two teams are a combined 1-14 SU and 3-12 ATS. Only the sharp bettors will take a stand in the better spots with those two teams, but Cleveland does fit a ATS situation that is better than 70% moving forward on winless teams. They lost however last week, although some bettors did push taking plus-3 and won taking more early in the week. Home underdogs had a rare losing week going 2-4 SU/ATS and are now 24-15 ATS year to date with a push. Totals went 9-4 over/under rewarding bettors who bet for more scoring in week 8 following some ugly offensive performances and scoring results in week 7.

My rushing guidelines can often be skewed against top-level QBs like Brady who make plays and can use a precision passing game and short pass attack as needed to offset a pass rush and running game. So even when a team like Buffalo rolls up a 167-72 rushing advantage over the Patriots, it shows that you must have a competent and capable QB that can make plays in the passing game under pressure. Clearly Buffalo does not, and their running game success can beat plenty of teams, but their QB play often fails on the road and against top teams. 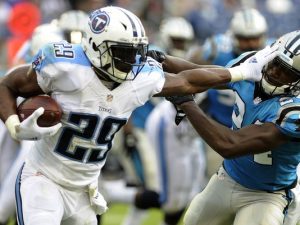 Titans RB DeMarco Murray is No. 2 in NFL rushing after 123 yards in victory over the Jaguars

Week after week the results show that running game success is often more relevant and important versus passing game prowess. Clearly a top QB and passing attack is important, and we factor that into our match-up analysis every week along with the stats and situations. But the teams who passed the most in week 8 were mostly losers again as noted.

Teams that rushed the ball at least 29 times went 7-0 SU/ATS. For the season, teams that rush the ball at least 29 times in a game (when their opponent does not) are 62-8-2 ATS (88%). Determine who is going to run the ball more often and with success against an opponent and you’re well on your way to more point spread success. Note however that it’s not that easy, but if you dig into the stats, project match-up advantages and identify edges, you’ll be rewarded in the running game more often and improve your ability to handicap and identify advantages in games and match-ups.

We thought we had such an advantage with the Chargers along with strong QB play from Rivers when they went to Denver. San Diego took the betting money from early in the week (+6.5) to late (+3.5). The Chargers out-rushed the Broncos 123-57, a 75% winning ATS situation. They also held the Broncos to just 15 first downs. Three turnovers by each team including a pair of pick-6 TDs helped over the total bettors. But with the Chargers trailing 27-19 and less than 4 minutes remaining, they couldn’t punch in the spread-covering TD with first and goal at the 2 yard line. It’s mind boggling that the Chargers did not run the ball even once with 100-yard rusher Gordon in the backfield. Consider too that Denver’s run defense is just average this year statistically, while their pass defense ranks No. 1. That was a big swing for me with San Diego, who did cover all teaser bets but disappointed most bettors big time.

Teams that out-rushed their opponent by at least 30 yards went 7-3 ATS in week 8. That stat guideline is now 59-26 (69%) ATS this season. Determine who will outrush their opponent by this margin, run the ball more often and control the ball, clock and chains and you’ll cash more point spread winners. This is proven year after year with nearly 75% ATS success and no season below 70% since 2000. I have the box scores and data base to prove it.

Teams that failed to get their ground game going in week 8:

Note how the yards were accumulated each week, passing vs rushing and if a team was playing from behind and forced to abandon their running game in the second half, any overtime yards and injury impacts during a game. The Jets were balanced with a strong run game, so their YPPL was not as strong, but they were pretty efficient. The Raiders & QB Carr passed for over 500 yards including overtime. But the other teams that passed the ball at least 45 times all lost SU/ATS – Jaguars, Browns, Chargers, Cardinals, but the Redskins were able to escape with a tie and ATS win despite 56 passing attempts.

We have seen total yards increase and the average yards-per-play is up to near 5.6 – which is as high as I’ve documented in recent seasons.

Historically, teams that suffer a minus three (-3) or greater turnover differential in a game have little chance to win and cover (7% ATS). Last season, on nearly 40 occurrences and games with a 3 or greater turnover differential, the team on the short end of the turnovers won and covered just one time each. There was surprisingly no games with a 3-turnover differential in week 8, leaving the record at 17-2 SU and 18-1 ATS for teams that are plus-3 (+3) or more in turnover margin in a game. Teams that were exactly plus-2 in TO margin went 2-0 SU/ATS and are now 21-5 SU and 22-4 ATS. Turnovers are most telling statistic in the NFL when it comes to point spread success. Yet fumbles are random and cannot be determined in handicapping the games. So instead of being hard on yourself in a defeat with a bigger turnover differential, just move on and evaluate the upcoming games and try to find match-up advantages that can help you get on the right side of more games while locating value in the betting line.

For the second-straight week the Raiders had over 100 yards in penalties and won. This was remarkable in week 8, as Oakland had 23 penalties for 200 yards and still won! The Redskins had 15 flags for 106 yards in a cover and tie game. And the Patriots also won easily despite 10 penalties for 106 yards. But undisciplined Buffalo with their ‘who cares’ coach also had 12 penalties for 84 yards.