NFL Handicapping – Inside the Numbers Week 9

The Falcons got their redemption to start the week Thursday, burying the Buccaneers 43-28 in Tampa. A strong, balanced attack for the league’s most productive offense helped the Falcons fly to victory as Atlanta maintains their 2-game lead on top of the NFC South at 6-3. Some surprises in week 9 included the Colts going to Green Bay and leading wire-to-wire in upsetting the Packers 31-26 as 7-point ‘Dog. The Vikings scored a TD with just 23 seconds remaining to take a 16-13 lead over the Lions. But Detroit QB Matthew Stafford connected on a 27-yard pass in the closing seconds and Matt Prater boomed a 58-yard game-tying field goal to send the game to overtime. The Lions took the extra session kickoff the distance for a TD to shock the Vikings and fans, 22-16. Minnesota lost their third straight game, but still holds first place in the NFC North at 5-3. A big swing game with the Lions moves Detroit to 5-4, while the Packers fell to 4-4. 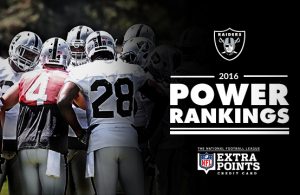 The Raiders are 7-2 & moving up in power rankings with Top-5 offense in yards, rushing & yards per play

The Raiders showed they are still for real in dominating Denver at home 30-20 with 30 first downs and a pound-the-ground power game at the point of attack with 218 rushing yards. Oakland stayed on top of the best division in the NFL at 7-2. The Chiefs were outplayed badly at home, but held on for a win over the Jaguars thanks to four Jacksonville turnovers. Kansas City is 6-2 in the AFC West, Denver fell to 6-3 and the Chargers victory keeps them in the wild card race at 4-5 as San Diego has lost five games that could have just as easily gone in their favor. The Monday night game saw more official’s calls go Seattle’s way. The Bills out-rushed the Seahawks 162-33, out-gained them 425-278 and had 30 first downs to 19 for Seattle. Yet the Bills, with their signature undisciplined play under Rex Ryan, had 11 penalties for 115 yards in a 31-25 spread-covering loss. Buffalo was (+7) up to game time, when they closed (+6) in many locations. We graded the Bills as a ‘Dog winner with a winning bet on Buffalo too.

The Bills as mentioned were a close call on the betting line, but most Bills bettors won taking plus +7 or +6.5. The Jets took a tough point spread loss for many, but they were also available at +4 on game day for some time before closing +3.5 in a 27-23 loss at Miami. I’ll grade it here as a winner for Miami bettors for favorite/dog purposes and knowing it was -3.5 for a greater period of time than -4. The Dolphins had 137 rushing and 137 passing yards for 274 total yards at 4.4 yards per play. But a 96-yard kickoff return with 5 minutes remaining after the Jets had taken the lead was the big play and difference maker both SU, ATS and pushing the game over the total. The Colts were in complete control leading the Packers 31-13 midway through the fourth quarter before QB Rodgers tacked on some late passing yards and a pair of TD passes to reward ‘over’ the total bettors. Along with the Dolphins/Jets game, the closest call and point spread play of the week was in Los Angeles, as the Rams went for a TD on 4th and 10 from the Panthers 10 yard line in the closing minute and scored to lose 13-10. The game was lined at Carolina (-3) across the board. Coach Fisher passed on the FG attempt and went for the touchdown.

This week it was proven again as four teams had dominating rushing games of over 200 yards and those teams went 4-0 ATS, yet the Jaguars (205 rushing) and a 4-0 negative turnover differential suffered a defeat. The Saints (248), Raiders (218) and Chargers (208) controlled the ball, clock and chains rushing the ball at least 39 times in dominating wins.

Beating the NFL over the long-term involves an understanding of the match-ups, situations and stats, and how to apply them for success. Let’s look at some additional stats and ATS notes from week 9 and use some of this moving forward in isolating match-up advantages.

NFL Inside the Numbers Week 9

In week 9, NFL favorites won for just the third week overall this season including back-to-back weeks. Favorites went 10-3 SU and 7-5-1 ATS. Some close calls each week with line moves, so there is some subjective data. That includes the Bills (+7) Monday night, who were bet to +6 near game time. We graded the Bills as ‘Dog as winner. The Steelers zoomed from pick ‘em to -3 as QB Ben Roethlisberger was announced as starter Sunday. But Pittsburgh bettors took the bait and a bath as the Ravens rolled up a 21-0 lead and held off a pair of fourth quarter TD’s to win 21-14. That was a home ‘Dog winners, but overall home underdogs went just 1-4 SU and 1-3-1 ATS as the awful Browns and 49ers were buried again with each losing at home. Totals went 8-5 over/under rewarding bettors who bet for more scoring in week 9 and we saw scoring total 651 points in 13 games to average over 50 points per game for the second straight week following last week’s season-high 53.5 PPG.

My rushing guidelines can often be skewed against top-level QBs who pass more often (Brees, Brady, Luck) and make plays with a precision passing game and short pass attack as needed to offset a pass rush and running game. So even when a team like the Bills dominate on the ground as they often have this season, it still takes a competent QB and less bonehead plays, penalties and turnovers to win.

Teams that rushed the ball at least 29 times went 7-2 SU and 9-0 ATS in week 9. For the season, teams that rush the ball at least 29 times in a game (when their opponent does not) are 71-8-2 ATS (90%). Determine who is going to run the ball more often and with success against an opponent and you’re well on your way to more point spread success. Note however that it’s not that easy, but if you dig into the stats, project match-up advantages and identify edges, you’ll be rewarded in the running game more often and improve your ability to handicap and identify advantages in games and match-ups.

Teams that out-rushed their opponent by at least 30 yards went 7-2 ATS in week 9. That stat guideline is now 66-28 (70%) ATS this season. Determine who will outrush their opponent by this margin, run the ball more often and control the ball, clock and chains and you’ll cash more point spread winners. This is proven year after year with nearly 75% ATS success and no season below 70% since 2000. I have the box scores and data base to prove it.

Teams that failed to get their ground game going in week 9:

Note how the yards were accumulated each week, passing vs rushing and if a team was playing from behind and forced to abandon their running game in the second half (Steelers and Broncos in week 9), any overtime yards and injury impacts during a game.

Historically, teams that suffer a minus three (-3) or greater turnover differential in a game have little chance to win and cover (7% ATS). Last season, on nearly 40 occurrences and games with a 3 or greater turnover differential, the team on the short end of the turnovers won and covered just one time each. In week 9 the Jaguars (4-0), 49ers (4-0) and Titans (3-0) were on the short end of the turnovers. It was a big difference in the Jaguars outcome and loss at Kansas City, where the 49ers and Titans were still outplayed and out-yarded by margin.

Teams that are plus (+3) or greater in the turnover column in a game are now 20-2 SU and 21-1 ATS this season. Teams that are exactly plus-2 in TO margin went 2-0 SU/ATS in week 9 and are now 23-5 SU and 24-4 ATS. Turnovers are most telling statistic in the NFL when it comes to point spread success. Yet fumbles are random and cannot be determined in handicapping the games. So instead of being hard on yourself in a defeat with a bigger turnover differential, just move on and evaluate the upcoming games and try to find match-up advantages that can help you get on the right side of more games while locating value in the betting line.

The Bills had 11 penalties for 115 yards and that followed 12 penalties last week. This team just plays a bad brand of football with too many stupid penalties. The Raiders actually lead the league with over 10 penalties per game including a record 20 last week. The Rams are No. 30 in the league in penalties with over 8 per game, and they added 10 more for 109 yards in the home loss to Carolina. The Steelers frustration in a flag-filled game at Baltimore showed with 14 penalties for 99 yards and the Broncos had 12 for 104 penalty yards.