NFL Handicapping – Inside the Numbers Week 5

Week 5 started with an ugly prime time game last Thursday when the Cardinals beat the 49ers in San Francisco 33-21. I highlighted this game in a prime time preview, noting the Cardinals would out-rush the 49ers and a big game was likely for RB David Johnson. Arizona did rush for 172 yards, but their offense was still mostly inefficient with 288 yards and 4.4 yards per play. But the 49ers were an embarrassment on national TV, totaling just 286 yards at 3.9 yards per play with three turnovers. The 49ers have lost four straight games with 302 total yards their most in a game over that stretch. That’s prompted coach Chip Kelly to make the switch at quarterback, as Colin Kaepernick will start in week 6 at Buffalo, where he’ll get to take a knee before the game during the national anthem and again during the game when he’s put on his butt and knees by the Bills defense.

We hit our two top plays with the Chargers (+4) and the Raiders/Chargers over the total in Oakland’s 34-31 win. That was a close point spread result, but the Chargers out-played the Raiders, yet found a way to lose again with four turnovers. San Diego had 423 yards offense and a huge 8.3 yards per play, but managed to lose. They still had to score late to reward their betting backers. Those of us Bears backers were not so fortunate. Chicago (+4) led the Colts 23-19 inside of four minutes to go in the game, but allowed a long TD pass and then the Bears fumbled on the first play in the following series in their own territory and the Colts kicked the spread-covering FG in a 29-23 win. The Bears drove down the field at the end, but came up short again and lost the game and money despite a week high 522 yards and huge 8.4 yards per play.

The Giants (+7) scored a late TD on Sunday night to gain a point spread push or perhaps a win if you shoppped the various sports books in their 23-16 loss at Green Bay. New York was another prime time embarrassment with just 14 first downs, 43 yards rushing and 219 total yards at 4.1 yards per play.

Beating the NFL over the long-term involves an understanding of the match-ups, situations and stats, and how to apply them for success. Let’s take a look at some of the stats of note from week 5, and use some of this moving forward in isolating match-up advantages.

NFL Inside the Numbers Week 5

In week 5, NFL favorites went 7-7 straight up (SU) and 5-8-1 against the spread (ATS). Some close calls each week with line moves, so there is some subjective data. Totals went 7-7 over/under. For the season, betting favorites have had just one winning week overall, and that was 8-7 in week 4. Underdog players and sports book have been winning more in the early season, and home underdogs specifically are now 15-9-1 ATS despite a 2-3 losing result in week 5. 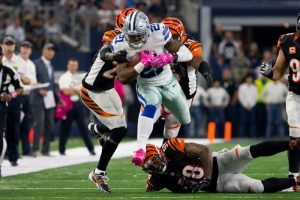 Teams that rushed the ball for 150 or more yards in week 5 went 3-0 SU and ATS, as the Titans trampled over the Dolphins with 235 rushing yards and the Bills stampeded the Rams run defense for 193 yards. Those two teams won and covered easily as road underdogs, while the Cowboys crushed the Bengals at home as ‘Dog with 180 rushing yards. The bad news Browns had been running the ball well in recent weeks, but at New England the Browns were completely shut down with a week-low 27 rushing yards as QB Tom Brady’s return to action was a big one with over 400 passing yards.

Week after week the results show that running game success is often more relevant and important versus passing game prowess. Clearly a top QB and passing attack is important, as teams like the Bills, Bears, Browns, Dolphins, Jets and 49ers have virtually no chance to make a deep playoff push or even get there with sub-par of poor QB play in the passing game. If the offensive line is weak, it becomes a complete disaster for these teams as they will struggle to run the ball effectively and then lack a proven passer to make plays in the passing game.

Teams that rushed the ball at least 29 times went 6-1 SU/ATS in week 5. The Rams were the only loser SU/ATS with 29 rushes for 102 yards, but their opponent Buffalo rushed for 193 yards on 27 carries for a dominant running game result. That 6-1 results does not include the Cardinals winner with 37 rushes, as their opponent the 49ers also rushed the ball 36 times. Nor does it include the push with the Packers (-7), who rushed 32 times for 147 yards in a dominating performance at the line of scrimmage with the Giants rushing for just 43 yards on 15 carries. Over the last four weeks, teams that rushed the ball at least 29 times (when their opponent did not) have gone 34-4 ATS.

Teams that out-rushed their opponent by at least 30 yards went 6-2-1 ATS in week 5. That stat guideline is now 38-14 ATS (73%) this season. Determine who will outrush their opponent by this margin, run the ball more often and control the ball, clock and chains and you’re well on your way to more point spread winners. It’s not as easy as it seems, but this situation has delivered nearly a 75% ATS result on average since the year 2000, with no season below 70%. I have the box scores and data base to prove it.

Credit must also be given to defenses and their ability to slow the opponents running game, and that’s part of the weekly handicap in determining running game success or failure each week in the match-up analysis. The Vikings dominant defense shut down another opponent in week 5, holding the Texans to just 59 rushing yards on 14 carries. Minnesota is the only undefeated team in the league (5-0), and the Vikings have a buy in week 6 along with the Bucs, who pulled the upset Monday night at Carolina with 37 rushing attempts while benefitting from a 4-0 turnover advantage. The pathetic Panthers are now 1-4 following last year’s Super Bowl loss.

Note too that teams that suffered a minus (-2) turnover margin were 0-1 SU/ATS in week 5, and those teams are 2-13 ATS this season. So turnovers again prove to be a most important stat in point spread outcomes, yet fumbles are random and cannot be determined in handicapping the games. So instead of being hard on yourself in a defeat with a bigger turnover differential, just move on and evaluate the upcoming games and try to find match-up advantages that can help you get on the right side of more games while locating value in the betting line.

The Eagles were the most penalized team in week 5, and it cost them in their first loss of the season at Detroit. Philadelphia had 14 penalties for 111 yards and a key turnover late in a 24-23 defeat as road favorite. The public lined up on the popular Eagles, and gave their money back to the sports books, as once again laying more than a field goal on the road in the NFL is a poor percentage play. Doing it against the worst two teams in the NFL like the Browns and 49ers worked out just fine however for Patriots and Cardinals bettors, noting the line of scrimmage advantage for those two playoff contending and well-coached teams.