NFL Handicapping – Inside the Numbers Week 10

The Browns continued to embarrass themselves in losing their 10th straight game (0-10) at Baltimore last Thursday night. Cleveland managed just 11 first downs and 144 yards total offense at 3.0 yards per play in a 28-7 defeat. Consider that the Browns led 7-6 at halftime and it’s clear this team is now an underdog to win a game this season. The 49ers managed to cover the big spread at Arizona in a last second loss at Arizona, 23-20. Yet San Francisco became just the third team to lose a game this season when they held a plus (+3) or greater turnover advantage. Like the Browns, the 49ers are proving to be a historically bad NFL team.

The Seahawks (+7’) blew up every teaser and ML parlay wager in their 31-24 win at New England Sunday night. The Patriots had four turnovers and a minus (-3) turnover differential; a 93% ATS situation against. Along with the Patriots, most public bettors also got buried betting on the week 10 popular plays of the Falcons and Packers. But the Cowboys rewarded most public bettors when they went to Heinz Field and stopped the Steelers 35-30 with many wise guys lining up on the Steelers.

A few games crossed over from favorites to underdogs for the home teams as the Jets closed a 1-point favorite in a 9-6 loss to the Rams while the Giants (+1) were also a late home ‘Dog Monday night but held on for the 21-20 win. The Chiefs (+3) rallied from a 17-0 deficit and stole the football and the game in the closing minute with a field goal to win 20-17 at Carolina. 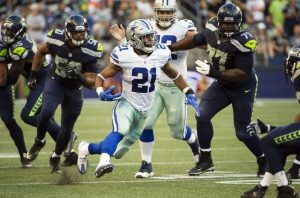 This was proven again in week 10 when the Texans controlled the ball on the ground with 181 rushing yards on 33 carries. Despite just 273 total yards offense, Houston won at Jacksonville 24-21. The Eagles shot down the Falcons high-flying and league-leading offense also controlling the ball and ground game. Philadelphia ran the ball 38 times for 208 yards and kept the Falcons offense on the sidelines much longer. Atlanta was able to run just 48 plays, make 11 first downs and rush 13 times for 48 yards. Going 2-for-11 on third down also proved problematic in a 24-13 loss. The Titans pounded the Packers with a similar approach, running the ball 30 times for 162 yards and balancing the attack with QB Marcus Mariota passing for 4 TDs and Tennessee rolled over the Packers as a home ‘Dog, 47-26.

Beating the NFL over the long-term involves an understanding of the match-ups, situations and stats, and how to apply them for success. Let’s look at some additional stats and ATS notes from week 10 and use some of this moving forward in isolating match-up advantages.

NFL Inside the Numbers Week 10

Teams that rushed the ball for 150 or more yards in week 10 (when their opponent did not) went 3-0 SU/ATS, and are now 27-10 SU and 32-6 ATS with two pushes. The Eagles and Titans showed how to slow down the Falcons and Packers with their top QB’s, and that’s to keep them on the sidelines by controlling the ball, clock and chains. 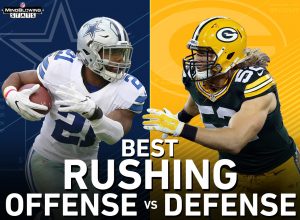 Teams that rushed the ball at least 29 times went 7-1 SU/ATS in week 10. For the season, teams that rush the ball at least 29 times in a game (when their opponent does not) are 78-9-2 ATS (90%). The Redskins were balanced and efficient against the Vikings top defense as Washington rushed for 128 yards on 28 carries and averaged 6.3 yards per play to take over the second half and shutout the Vikings in the final 30 minutes to win 26-20. Determine who is going to run the ball more often and with success against an opponent and you’re well on your way to more point spread success. Note however that it’s not that easy, but if you dig into the stats, project match-up advantages and identify edges, you’ll be rewarded in the running game more often and improve your ability to handicap and identify advantages in games and match-ups.

Teams that out-rushed their opponent by at least 30 yards went 8-1 ATS in week 10. That stat guideline is now 74-29 (72%) ATS this season. Determine who will outrush their opponent by this margin, run the ball more often and control the ball, clock and chains and you’ll cash more point spread winners. This is proven year after year with nearly 75% ATS success and no season below 70% since 2000. I have the box scores and data base to prove it.

Big ground gainers in week 10
(Yards/Attempts with straight-up (SU) and against the spread (ATS) results).

Teams that failed to get their ground game going in week 10:

Historically, teams that suffer a minus three (-3) or greater turnover differential in a game have little chance to win and cover (7% ATS). Last season, on nearly 40 occurrences and games with a 3 or greater turnover differential, the team on the short end of the turnovers won and covered just one time each. In week 10 the Packers (3-0), Bears (4-1), Chargers (4-1) Cardinals (4-1) and Patriots (4-1) all lost ATS, but Arizona managed to escape despite a 4-1 turnover disadvantage. That’s how bad the 49ers truly are.

Teams that are plus (+3) or greater in the turnover column in a game are now 24-3 SU and 26-1 ATS this season. Teams that are exactly plus-2 in TO margin went 2-0 SU/ATS in week 9 and are now 25-5 SU and 26-4 ATS. Turnovers are most telling statistic in the NFL when it comes to point spread success. Yet fumbles are random and cannot be determined in handicapping the games. So instead of being hard on yourself in a defeat with a bigger turnover differential, just move on and evaluate the upcoming games and try to find match-up advantages that can help you get on the right side of more games while locating value in the betting line.

The Packers problems also included 12 penalties for 107 yards while the 49ers had 9-for-100 yards. The Cowboys strong and balanced attack overcame 10 penalties for 98 yards.

Week 11 projections with point of attack play advantages appear to favor the Titans over Colts with Indy off a bye at home. The Cardinals have an edge over the Vikings, who are last in the league in rushing offense and have lost four straight games after starting 5-0. Tthe interesting match-up to watch is Baltimore’s No. 1 rush defense (71/game & 21 att/game) versus the Cowboys No. 1 rush offense (161/game & 33 att/game).  The Dolphins and Rams in Los Angeles figures to be a run-heavy game as QB Jarod Goff also makes his first NFL start for Los Angeles.