Week 15 was a good one for us, as we nailed our Top Plays Sunday going 3-0 plus a push. The Titans (+6) won outright at Kansas City 19-17, and a pair of Big Bertha Top Play 20* totals worked out well as the NY Giants beat the Lions 17-6 and the Falcons flew over the 49ers 41-13. I provided some analysis to members and also posted the Giants/Lions game analysis and ‘under’ the total play at Off Shore Gaming Association (osga.com), where I provide sports betting insight and articles to a larger audience of sports enthusiasts. Off Shore Gaming Association Members also get access to my free plays (7-1 since I started providing in November), along with exclusive member benefits and protections with access to the industries top-rated offshore sports books. 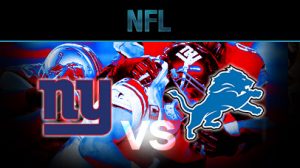 The Detroit Lions visit MetLife Stadium to tackle the New York Giants in what should be chilly temps in the 40s and rainy weather. Winds are expected to be 10-20 MPH. Detroit (9-4) enters with a 2 game lead in the NFC North, but they have a tough finish with this game at New York followed by a trip to NFC-best Dallas and a potential division title game with Green Bay to finish the regular season. The Giants (9-4) have won 7 of their last 8 games and hold the top wild card slot in the NFC while trailing the Cowboys by 2 games in the NFC East after dispatching Dallas for a second time this season last week on this field 10-7. The G-Men managed just 12 first downs and 260 yards offense in that division duel, and we expect similar struggles Sunday. The total has dropped sharply at the sports books from the opener of 44 and is likely to dip further on game day. The Giants are 0-6 ATS at home following their last six dates with Dallas, and just 1-4 SU and 0-4-1 ATS vs. NFC North foes since 2014.The Lions are plenty live in this match-up if QB Matthew Stafford is at his best. But he bruised and dislocated his middle finger in last week’s 20-17 escape vs. Chicago, and looked awful passing the ball after the injury. Detroit has won 5-straight games and 8 of their last 9 overall with Stafford playing at a MVP level while passing for over 3,400 yards. He has led the Lions to a NFL-record 8 fourth-quarter comeback wins this season. Stafford currently has his second highest completion percentage of his career (66.7), his second highest yards per attempt (7.4), and his lowest interception percentage (1.5%) with a 22/7 TD-INT ratio.

But Stafford’s finger dislocation and torn ligaments is likely to affect his accuracy and performance, and it’s noted the ball is not spinning quite the same in late-week practices while wearing a one-finger black glove. Along with the weather and additional match-ups, this shapes up as a defensive duel despite two proven passers and quarterbacks. The Giants defense has delivered allowing just 5.1 yards per play this season to rank top-7 in the league and even better in their last three contests. While Stafford will be barking out protection calls or audibles to his teammates after identifying the Giants coverage schemes and free blitzers to himself, it’s likely we’ll see more quick hitters in the passing game and more rushing attempts by the Lions this week as they try to protect their star quarterback. But the Giants allow just 3.6 yards per rush to rank No. 3 in the league, so that too will be tough sledding.

Just one of Detroit’s 13 games this season has been decided by more than 7 points, making the Lions a teaser bettors dream. In this match-up, we note that the Lions allow 4.3 yards per rush to rank in the bottom half of the league, and 5.0 YPR over their last three games. The Giants have an erratic offense that runs the ball just 24 times per game and QB Manning has completed less than 60 percent of his passes over the last three games. But the Giants figure to run the ball more in this match-up despite ranking in the lower quartile of rushing and rush attempts this season. Part of that reasoning will be the weather, and the other is defense and game planning. Stafford went through four different gloves last week after the finger dislocation, and the focus will be on protection and likely shorter, quick passes aided by more rushing. New York’s scoring defense has improved from 28 PPG last year to 19 PPG this season while allowing 349 yards per game. At home they figure to be tough again after holding Dallas’ strong, balanced offense to 7 points and 260 yards last week.

The Giants have played 5-straight games under the total and the Lions have played 7-straight to the under. Now add in the combination of the weather, match-ups and conservative play-calling and we see less scoring than expected again in a play-off type environment.

The 49ers (1-12) are going down as one of the worst teams in NFL history, along with the this year’s winless Browns. San Francisco is also just 3-9 ATS, but they have scored enough to go 7-6 over/under. That’s due to a defense that ranks No. 32 in the league allowing 415 YPG and now face the Falcons top-ranked offense and QB Matt Ryan on their fast home turf where they are at their best. Atlanta is No. 1 in the league in yards-per-play (6.5) while piling up over 400 yards per game. But the Falcons defense is also deficient, allowing 376 YPG to rank No. 28 in the league. Both teams scoring defenses rank No. 32 and No. 28 allowing 35 PPG and 26’ PPG respectively. With those numbers, the Falcons have gone 11-2 over/under this season and are by far the best ‘over’ the total team in the league. 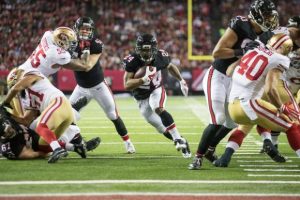 The Falcons are tied with the Buccaneers at 8-5 on top of the NFC South, so they will hold nothing back against an inferior foe. Atlanta is also 6-0 over/under at home this season with the lowest scoring game 55 points. Last week Atlanta rolled to a 42-14 road win at Los Angeles, and the 49ers have allowed 23 and 26 points in the last two games to the anemic offenses of the Jets and Bears.

A number of historical situations and patterns come into play favoring more scoring in this match-up with the 49ers traveling from West to East, and San Francisco is also 10-2 over/under as a road underdog of a FG or more over the last two seasons with one of those unders being at Arizona a month ago in a 26-23 loss in which the Cardinals racked up over 440 yards and 26 first downs, and Arizona’s defense is now No. 1 in the league in total yards again per game at 298.

San Francisco rushed for over 200 yards in last week’s loss vs the NY Jets, as QB Kaepernick adds to the teams running success and RB Carlos Hyde had 193 rushing yards in defeat. The Falcons run defense is average at best, so San Franc should also move the ball with some success, and clearly the Falcons are going to fly on offense this week even without star WR Julio Jones, who is out for the second straight week with a toe injury.

This game has strong match-up and historical situations pointing to plenty of scoring and that’s how we’ll play it…over the total.