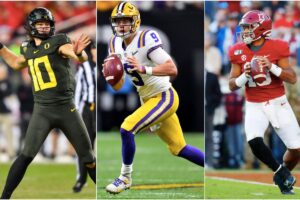 But the intrigue and betting interest is which QB will be drafted No. 2 and No. 3. Tua Tagovailoa is “a polarizing player in this draft, and there’s more speculation on where he’s going to end up,” according to William Hill Vice President of Trading Nick Bogdanovich, who also told me Tagovailoa is taking the most bets.

But Justin Herbert is moving up the interest list to be the No. 2 quarterback taken, and his over/under draft position is 5.5.

Utah State QB Jordan Love has seen his first round draft position drop further as his over/under is now 19.5 after opening 12.5 at William Hill.

Here is an article on wrote at Forbes on quarterbacks you can bet on in the first round of the NFL Draft. Included is some Tua Tagovailoa prop bets offered at William Hill.

William Hill continues to add more NFL Draft props and here are additional players and props you can bet on. And as Bogdanovich told me, “This year’s draft will be by far the biggest handle we’ve seen.”

Bookmakers betting on props is another article I provided at Forbes and big bookmakers like William Hill, Fan Duel and Draftkings along with the SuperBook in Las Vegas continue to add more props and NFL betting options as the draft nears. All four of those companies are expanding into Colorado when that state opens for sports betting May 1, and I provided another piece on the Westgate SuperBook’s expansion to Colorado with comments from Vice President of Race & Sports Jay Kornegay, who called me to discuss directly.

Here is additional insight on the NFL Draft with first round mock draft analysis by Forbes staff.