The Houston Rockets are the No. 4 seed in the 2019 NBA Western Conference playoffs, and the Rockets are +510 to win the West at BookMaker, a leading online sportsbook. After taking the big favorite Golden State Warriors to 7 games in last year’s Western Conference finals, the Rockets return to the playoffs on a roll finishing the regular season on a 20-4 run with three losses by 2 points or less. 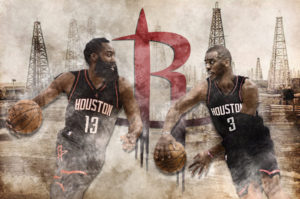 Houston is healthy as the playoffs begin, and recall PG Chris Paul was injured in last year’s playoffs during the West finals. James Harden is playing at an elite level after leading the league in scoring (36.1 PPG), and along with Clint Capela and Chris Paul, the Rockets may have the warriors and will to take out Golden State this season.

Odds to win Conference and NBA Championship (provided by BookMaker)

Rockets star James Harden posted gaudy numbers this season scoring 36.1 points per game. He led the league in scoring by 8.09 points per game, the largest margin since Wilt Chamberlain in the 1962-63 season. He became the first player to average 36 points and seven assists in a season. Harden also makes 88% of his free 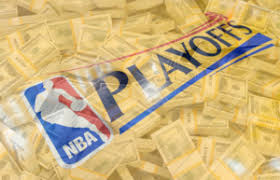 throws and makes nearly 5 three-pointers per game on 13 attempts per game (36.8%). Yet Harden is expected to be the league MVP runner-up to Giannis Antetokounmpo of the Milwaukee Bucks. Still, Harden’s tremendous scoring season included nine games of scoring 50 points or more – the most since Kobe Bryant totaled 10 in the 2006-2007 season. Only Wilt Chamberlain (multiple) and Michael Jordan had at least eight 50-point games in a season.

The Rockets finished 53-29 this season and went 6-3 when Harden scored at least 50 points. But reaching the NBA summit and winning a NBA Championship is the focus for Harden. While Harden and Paul will be the focus of the Jazz, Capela will be a key inside and he averaged 13 points on 59.2 percent shooting along with 10.2 rebounds and 3.6 blocked shots in the five games against the Jazz in last year’s playoffs.

The Portland Trailblazers rallied from 28 points down to beat Sacramento 136-131 in the last game of the regular season Wednesday. The Kings rested more starters, but the Blazers had plans of losing and being the No. 4 seed. Instead, Portland is No. 3 and plays Oklahoma City in the opening round. And Portland is the only higher seed that is a series underdog in Round 1. 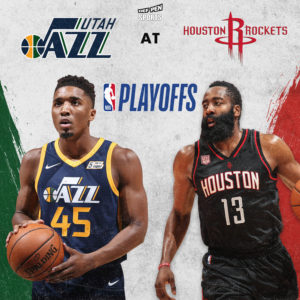 Houston now plays Utah, and the winner will likely play Golden State, where a rematch of the Rockets and Warriors would be one to watch. But the Rockets/Jazz series is compelling, and Utah has the defense, perimeter players and depth to make this a most competitive series. The Jazz have the best defensive rating in the NBA, and since the All-Star break, Utah has the second-best point differential in the NBA behind the Warriors. The Jazz defensive rating vs. the Rockets this season was exceptional, and since the All-Star break, Houston (#1) and Utah (#2) rank 1-2 in best NET rating (team’s point differential per 100 possessions). Both teams are bet on and buy on, and it’s too bad they match-up in the opening round.

But a key statistical note regarding Rockets point guard Chris Paul is that in the three games he played against the Jazz this season, Houston played slower and the Rockets pace rating ranked bottom three in the league.

That makes Game 1 UNDER 214.5 a play even with the drop in price as sharps have made their money position known.

Here are the exact number of games series prices for the Rockets and Jazz.