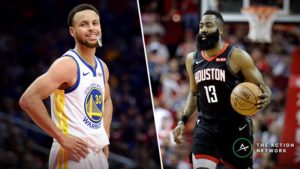 The Warriors and Rockets tipoff conference semifinal action Sunday, and Golden State is currently a -250 favorite to win the series over Houston with the Rockets +200 to win and advance.

In my latest article at Forbes, I break down key series between the Warriors and Rockets with Game 1 and series situations and betting info, along with the other conference semifinal series prices and adjusted odds to win the NBA championship.

The Rockets are taking more money on both the series and Game 1 where Houston is a +5.5-point underdog.

By the way, the Milwaukee Bucks (-7.5) open their series at home against Boston in Game 1 Sunday also, and the Bucks are off a 4-0 series sweep over Detroit in which they outscored the Pistons by a record margin of 95 points. 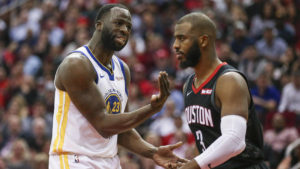 The Rockets have to get strong shooting from James Harden, and slow down the NBA’s leading scorer in the playoffs Kevin Durant (35 PPG), who made 18-of-45 three pointers in Round 1 and closed out the series with a 50 point performance against the Clippers.