Sunday saw some remarkable finishes and scoring as the early games went 7-1 over/under including 5-0 over the total with at least 54 points scored in every location with cold, wintry weather mix.  The Cowboys are 7-5 over/under and the Bears 8-4 over/under this season, and I’ve discussed numerous times the defensive deficiencies and injuries that have crippled the Chicago Bears.  The match-ups and stats support more scoring tonight despite very cold temperatures at Soldier Field. 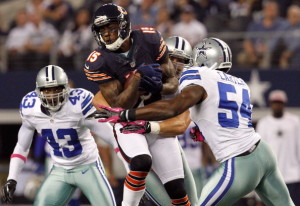 BIg games expected by all WRs including Bears Brandon Marshall

Cowboys games average over 52 PPG while Bears games are even higher averaging over 54 PPG this season.  While the Bears run defense has been dreadful allowing over 200 YPG and 6.0 YPR their last five games, Dallas will be able to also attack a weakened secondary with their passing game strength. Chicago reserve CB Zack Bowman, who is filling in for the injured Charles Tillman, figures to have a tough time containing Cowboys WR Dez Bryant and the high-powered Dallas passing attack.  Cowboys QB Tony Romo will also attack underneath with success off the play-action to top TE Jason Witten, as the Bears have struggled against the run and short pass without veteran LBs Lance Briggs and D.J. Williams.  Running Back Demarco Murray figures to have one his best games of the season against a soft-seven man box by the Bears if Chicago double-teams WR Bryant in their cover-2 defense.  Chicago’s defense is now allowing 6.2 yards per play to rank near the bottom of the league, and only timing issues with the weather and dropped balls figure to slow the Cowboys attack.

Both these teams average 27 PPG and the Bears will attack through the air with their two star receivers Brandon Marshall and Alshon Jeffery.  The Cowboys defense is dreadful allowing 422 YPG and 6.3 YPPL and their pass defense should get carved up with a top-tier passing attack, even with backup QB Josh McCown at the controls.   Versatile, veteran RB Matt Forte also figures to have a strong game as he’ll surpass 1,000 yards rushing tonight ( 963 ) and is having his finest season receiving with 58 catches. Look for more press coverage by the Cowboys, and even with strong LB Sean Lee patrolling underneath, look for the Bears big, strong receivers along with 6’6 TE Martellus Bennett ( 45 catches ) and Forte to still beat them with catch and run routes against the zone or over the top.

Both teams are just 1/2 game out of their division leads, so this game has big playoff implications with the loser facing a real deficit in the division and more so in the wild card chase.  The cold weather and wind tapers my opinion on the total from being a Top Play as temperatures will be below 20 degrees and winds in excess of 15 mph. It will feel like sub-zero temperatures on the field, but we’ll still shoot over the total and expect both offenses to bring their best and attack poor defenses making for more scoring Monday night.