The Seattle Seahawks  ( 10-1 SU / 7-4 ATS ) host the New Orleans Saints ( 9-2 SU / 6-5 ATS ) on Monday Night football December 2, 2013. ESPN carries the coverage live from CenturyLink Field in Seattle, WA at 8:40 ET.  My clients and I are off a huge weekend of winners in the NFL and CFB rivalry weekend which included a 3-0 sweep of our Top Rated Big Bertha plays.  Let’s chip-in with a Par in this key contest with the NFC’s #1 playoff seed on the line. 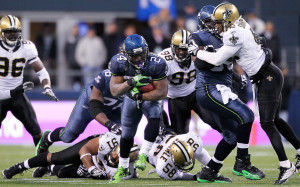 This line is on the rise and our Monday Night Football Handicapping Week 13 analysis anticipates our ‘Fairway Fundamentals’ to play out in a Seattle victory.  The Seahawks enter on a 6-game winning streak having won 13-straight games at home.  The Saints have won 3-straight but are just 1-3 ATS their last four games.  Yet while the betting line is rising on Seattle, the Saints are actually taking 60% of the bets.

Much anticipation for the return and debut of Seattle star WR Percy Harvin (hip), but he’s not likely to play or have a big impact if he’s cleared to go.   Here are some key match-ups to watch, and the Saints success will once again depend on the NFC’s top QB Drew Brees.  He’ll go up against the Seattle secondary that is the league’s best, but will be without two top CBs in Brandon Browner (groin) and Walter Thurmond (suspension).  But the Saints will be without CB Jabari Greer (knee), while RB Darren Sproles (ankle) and G Jahri Evans (ankle) are both listed as questionable but likely to play a little banged up.

The key to this contest for Seattle is to slow the potent passing game of Drew Brees ( 28 TD’s and QB rating 107 ) and his top target TE Jimmy Graham ( 65/946 and 11 TD’s ).  The Saints top rusher is Pierre Thomas ( 486 yards ) while the Seahawks counter with strength and balance on both sides of the ball.   Seattle is #2 in the league in total defense ( 293/game ) and the league’s #1 pass defense ( 180/game ) to slow what the Saints do best.  The Seahawks are #2 in the league in rushing ( 148/game ) and running back Marshawn Lynch ( 925 yards, 9 TD’s ) will carry a heavy load against the Saints most improved defense.  But QB Russell Wilson has been very efficient with 8.6 yards per pass attempt and a QB rating of 105 while throwing 11 TD’s and just 2 INT’s his last five games with a rotating offensive line.

The Saints clearly play their best ball at home, as do the Seahawks.  While New Orleans can be appealing as underdog in this price range, must note they now play at the league’s loudest and most dominant home field on Monday Night football.  New Orleans has gone 3-2 on the road which includes 2-2 SU and 1-3 ATS outdoors.  With temperatures near freezing and a 20% chance of rain, look for the Seahawks to out-rush the Saints by margin and force Brees to the air often.  With our Fairway fundamentals in place with the better running game and defense, Seattle gets our support against the Saints.