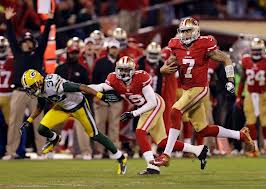 The 49ers have lost back-to-back games to a pair of top NFC teams following their 23-20 loss vs. the Saints in New Orleans.  San Francisco (6-4) trails Carolina (8-3) and Arizona (7-4) in the chase for the two wild card spots in the NFC as Seattle (10-1) has opened a big lead in the NFC West division.  The 49ers ground game is still solid at 141 rushing YPG to rank #4 in the NFL.  Running back Frank Gore had scored a TD and/or had at least 100 yards in 7-straight games prior to being stopped by the Saints.  The passing attack under QB Kaepernick has fallen off and averages just 168 YPG against sub-par pass defenses.  But the difference in this NFC Monday night football handicapping week 12 match-up is defense,as the 49ers physical unit allows 325 YPG and 5.1 yards per play to a schedule of stronger offenses while Washington’s dreadful defense is weakened allowing 31 PPG including 24, 41, 27 and 33 points in four home games.  Washington’s defense has allowed 390 yards per game and 6.4 yards per play and is even worse in the red zone (#31 NFL). While the 49ers offensive YPG stats are not too impressive, note they have gouged weaker opponents on their schedule going 5-0 SU/ATS vs. losing teams with an average margin of victory of 35-13.  San Francisco’s four losses have been to Seattle, Indianapolis, Carolina and New Orleans; all upcoming playoff teams.  Don’t expect the reeling Redskins defense to slow down their strongest home opponent to date as we expect the 49ers versatile attack to bounce back off two poor performances against superior defenses and shine against the weak Washington defense on national TV.

Further credence to our support of the 49ers and fade of the Redskins is the poor performances of Washington as an underdog this season.  In the five games the Redskins have been an underdog this season, they have gone 0-5 SU/ATS and lost by the following margins in reverse order:  Eagles (8), Broncos (24), Cowboys (15), Lions (7) and Packers (18). While the Redskins have played a tough schedule, they are right where they should be at 3-7 based on performance.

The Redskins offensive stats show them #5 in the NFL averaging 412 YPG and 5.8 yards per play against below average defenses, including 454 YPG their last three games.  However, regular observers know this team has played from behind often and accumulated some garbage time yards even though their running game has been strong leading the league with 155 rushing YPG.  Washington has only averaged 10 ppg in the first half of games this season and recall they trailed Philadelphia 24-0 last week before more late stats and scores made the score more respectable in a 24-16 loss. The Redskins run an average of 71 plays per game to rank #3 in the NFL while the 49ers run 59 plays per game to rank last in the NFL.  That and the expected freezing temperatures at game time are the only thing keeping this from a stronger play on ‘over’ the total, as the 49ers should still be efficient on offense even with fewer plays.  Washington QB Robert Griffin lll hasn’t made enough plays when they count in the red zone, but a few more conversions tonight should result in a higher-scoring game.

Washington has struggled against the stronger NFC going 1-6 ATS this season.  As noted, the 49ers are 5-0 SU/ATS against losing teams. In competitive lined games (6 or less), the point spread comes into play less than 15% of the time.  Meaning, if San Francisco wins, they are likely to cover the spread better than 85% of the time. That’s what we expect tonight by the better 49ers team motivated to stay in the playoff chase.