Horse Analysis And Picks For The 2020 Belmont Stakes

The horses are approaching the starting gate.

Belmont Stakes Day has arrived. An unusual and unsettling season in horse racing and sports has seen the Triple Crown adjusted. The first leg is the Belmont Stakes, and while the buildup and race has been promoted throughout the media, it’s really not a strong race this year. 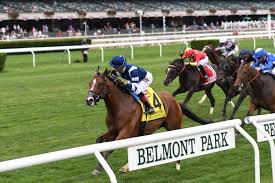 I’ve provided a horse-by-horse capsule for the 2020 Belmont Stakes which I included as part of the Belmont Stakes Betting Guide for TheLines, a sports betting news site to which I contribute articles and insight with information you can bet on.

But along with the Belmont Stakes is five other graded stakes races at Belmont Park that’s part of a big weekend of racing.

Another site I contribute to where you can review sports, stats and analysis with information you can bet on along with horse racing is numberFire, part of the FanDuel Group. There is some additional historical information you may find useful in the numberFire Belmont Stakes Betting Guide.

All the hype surrounding the Belmont Stakes favorite Tiz the Law may well prove to be just that by Saturday night. We’re not looking at a Triple Crown threat, at least in this observers eyes. And when you think that the true great racehorses that won the Triple Crown in recent years with Justify (4/5) in 2018 and American Pharoah (3/5) in 2015, the odds on those superior runners are likely to be what Tiz the Law goes off at post. 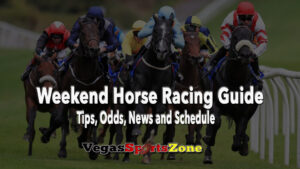 Sorry, but Tiz the Law is not at that level, and thus he is going to be overbet in the Belmont Stakes. Even against a sub-par field, and not having to run the traditional 1 1/2 mile Belmont and instead reduced to 1 1/8 miles this year, there are still just a few horses in the field that could spoil the party for Tiz the Law and his supporters.

Along with the horse analysis below that I provided to TheLines, I also previewed the Belmont Stakes for Forbes.

For detailed horse racing analysis by a top professional handicapper, follow @TopRaceReports and join his reports to learn while you earn. For more racing stats, analysis and information you can bet on, follow along at numberfire including Belmont Stakes Day races.

Regardless of the results Saturday and the Belmont Stakes, enjoy the races, keep your bets in line and know there are five other big stakes races at Belmont Park Saturday with some offering more value and greater payoff potential than the $1 million Belmont Stakes.

Here is the field and capsules for the horses in the 2020 Belmont Stakes:

1. Tap It to Win (6/1): Three wins in six starts with an off-the-board finish in his only graded stakes race last fall in the Breeder’s Futurity (G1) at 3-1 odds. Returned from sesamoid surgery and enters on the heels of a front-running facile Allowance race win June 4 over the Belmont surface and nearly set the track record. Last year’s winning Belmont Stakes trainer Mark Casse brings his rapidly-improving Tapit colt right back with Hall of Fame rider John Velazquez a two-time Belmont winner riding in his 24th Belmont Stakes.
2. Sole Volante (9/2): Sole Volante has hit the board in all six starts, and his four wins include the Sam F. Davis (G3). He was also runner-up in the Tampa Bay Derby (G2). French trainer Patrick Biancone prepped Sole Volante with an Allowance race win June 4 at Belmont, and he’s a closer that will try to catch Tap It to Win and Tiz the Law. Journeyman jockey Luca Panici makes his Belmont Stakes debut and rides at Belmont Park for just the second time in his career.
3. Max Player (15/1): Trainer Linda Rice shoots to become the first woman to train a Belmont Stakes winner, and says Max Player has “dramatically improved” in his training since winning the Withers (G3) Feb. 1 at Aqueduct. Max Player will try to rally from off the pace, and he’s is in good hands with strong stretch rider and two-time Belmont Stakes-winning jockey Joel Rosario in the irons. Rosario road Tonalist (9/1) and last year Sir Winston (10/1) to Belmont Stakes glory and he’s hit the board in five of eight Belmont Stakes starts. Tough challenge though with Max Player moving up in class and off a layoff.
4. Modernist (15/1): Jockey Junior Alvarado will be pressing the pace and stalking the leaders with Modernist, who has won twice at this 1 1/8 mile distance including the second division of the Risen Star (G2) at Fair Grounds. Hall of Fame trainer Bill Mott is just 1-for-8 in the Belmont Stakes but that winner was longshot Drosselmeyer (13/1) in 2010. A similar result would be very surprising as Modernist does not possess the speed ratings of the stronger horses in the field.
5. Farmington Road (15/1): One of two horses in the field for EPO trainer Todd Pletcher, a 3-time Belmont Stakes winner. Pletcher is always a threat going a route of ground on his home track, and rider Javier Castellano will try to rally him from the back of the pack. Castellano is a prominent rider on the NY racing circuit and four-time Eclipse Award winner as the nations top jockey. Does he have the horse to win his first Belmont Stakes after three close runner-up finishes? Farmington Road is working well, and finished a distant fourth in his two graded stakes starts including the tougher second division of the Arkansas Derby (G1).
6. Fore Left (30/1): A late addition to the field this week, trainer Doug O’Neill decided to enter this four-time winner and got top NY jockey and 2017 Belmont Stakes-winning rider Jose Ortiz to hop aboard. Fore Left will set or press the pace, but he’s never run this distance. Fore Left won his last race in February in Dubai going one mile.
7. Jungle Runner (50/1): Trainer Steve Asmussen has the biggest longshot in the race. This son of top sire Candy Ride has not come close to hitting the board in his last three starts which includes 8th in the first division of the May 2 Arkansas Derby (G1). He’s a closer, but won’t be making up ground on better colts. The youngest rider in the field Reylu Gutierrez (23) gets his shot in a Classic race.
8. Tiz the Law (6/5): The prohibitive favorite with four wins in five starts including the Florida Derby (G1) in March by more than four lengths and a three-length win in the Holy Bull (G3). His only defeat came over a sloppy track so watch the weather at Belmont Saturday, but only a stray of showers or thunderstorms possible days before the race. Jockey Manny Franco is just 25 years old but has more than 9,000 races under his saddle, and he’s been among the leading riders at Belmont in recent years. Franco rides in his first Belmont Stakes for New York-based trainer Barclay Tagg. Tiz the Law will be be stalking the leaders and heavily bet as a popular choice to win for his Saratoga Springs owner and investor group.
9. Dr. Post (5/1): This is the stronger colt of trainer Todd Pletcher’s pair in this race, but Dr. Post will try to win the Grade 1 Belmont in his first graded stakes race. He’s 2-for-3 in his career wining from off the pace in a minor stakes race at Gulfstream in April with his career-best speed figure. Dr. Post is a well-bred improving and versatile runner and he gets the guidance of New York-based rider and 2016 Belmont Stakes-winning jockey Irad Ortiz, Jr, who leads all jockey’s in victories this year.
10. Pneumatic (8/1): This Steve Asmussen-trained colt is also 2-for-3 and finished third in his stakes debut in the Matt Winn (G3) a month ago at Churchill Downs. Pneumatic had the lead at the three-quarter pole and will try to press the pace and hold up going a little longer in this race with underrated Ricardo Santana, Jr. riding again in his second Belmont Stakes start. Pmeumatic is a late-bloomer with speed, worked very well June 8 in prep but still must show improvement to pull a big upset.