My latest article and update at The Lines is the Heisman Trophy odds and leading candidates to capture the award.

Clemson QB Trevor Lawrence and Alabama QB Tua Tagovailoa are the favorites, and those two teams are the overwhelming favorites to return to the 2020 national championship game. We correctly called Clemson’s outright underdog win over Alabama in the 2019 national championship in an article and breakdown at Forbes, and Lawrence will be tough to beat if he remains healthy as Clemson is expected to go undefeated as a double-digit favorite in every regular season game this season.

Here is a brief analysis on the two Heisman favorites, along with the odds on the Heisman candidates from DraftKings Sportsbook along with FanDuel Sportsbook and Betstars. Additional player analysis in the article at The Lines. 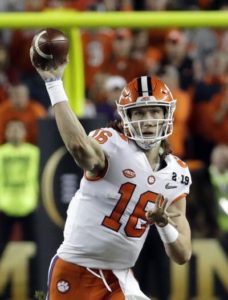 Lawrence is legit in every way after taking over as starter in October last season and leading Clemson to the national title. Still a teenager, he passed for 3,280 yards with 30 touchdowns and just 4 interceptions to earn ACC Offensive Player of the Year and Rookie of the Year honors. Clemson will be favored by double-digits in every game this season and Lawrence will lead an explosive offense again after averaging 47.4 points per game in his starts last season. The 6-foot 6 sophomore is a winner and leader with exceptional arm strength, surprising speed and a Heisman favorite taking money as the one to beat.

Tagovailoa was leading the Heisman voting throughout last season until the SEC Championship game. Alabama rallied to beat Georgia 35-28 with Tagovailoa on the sidelines after his worst game of the season going 10-of-25 fo 164 yards with one touchdown and two interceptions. Tagovailoa’s sensational season still included 3,966 passing yards with 43 touchdowns and just 6 interceptions. He also rushed for 318 yards and 5 touchdowns. Alabama is expected to pile up more than 45 points per game again this season, and Tagovailoa has one of the countries elite receivers to throw to in Jerry Jeudy, along with two other All-SEC wide receivers forming the best receiving core in the country.

At the Westgate Superbook in Las Vegas, Lawrence and Tagovailoa are both co-favorites to win the Heisman Trophy at +300 (3-1). Clemson is +225 and Alabama +250 to win the National Championship followed by Georgia (+600) and Oklahoma (+1400), who also have the next choices to win the Heisman in QB’s Jake Fromm and Jalen Hurts.