I’m often asked if I play fantasy football. The answer is yes for full season leagues but no for daily fantasy, as Nevada is shutout from the daily fantasy sites like DraftKings and FanDuel. I don’t play US Fantasy, which is a pari-mutuel style fantasy sports offering that became the first Daily Fantasy Sports (DFS) site to apply for a Nevada Gaming License two years ago and is now played by many sports fans in Nevada at the casino sports books and via the US Fantasy App.  I’m involved in various fantasy sports pools and other contests including ATS, survivor, NCAA Tourney and more that are often available on the CBS Sports platform or other office pool sites. 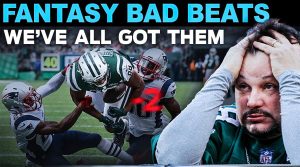 I’ve been playing in fantasy football leagues for more than 20 years, as it’s my way to stay in contact with old high school and college friends since I moved to Las Vegas more than 15 years ago to pursue my passions and enjoy the sports, gaming and poker scene in Las Vegas. I’m in a league with both groups of friends, and wish I was in contact with my friends more often, but it remains a fun way to interact and banter back and forth. Many of my friends from my league of high school buddies went on a pair of golf trips to remember in 1994 in Scotland and 1999 in Ireland, playing some of the most renowned and recognized courses in Europe. Those memories are special. So too is the fun of fantasy football and having some good laughs with friends while enjoying our weekly football fix that millions of fans enjoy. 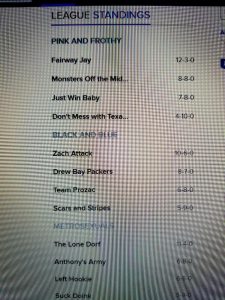 I’ve been beaten by my buddies for a handful of years recently, but this year I roared back like the LA Rams and have moved to the top like the Philadelphia Eagles and my former hometown Minnesota Vikings. In a pair of 12-team leagues with mostly standard scoring, I finished first in my division and was the top-seed in each league. In my college league, I was 10-0 at one point before having my worst week during our ‘double week’ of play, and still won the total points title.

Some good fortune helps in fantasy football leagues, as having less scoring against you is often as key as having a strong lineup that produces points. This year I had some very strong teams, and I’ve listed my lineups below. In last week’s semifinals, my team scored the most points in both leagues in the playoff round, as RB Todd Gurley went off for 3 TDs and a big day both rushing and receiving. I drafted QB Carson Wentz in one of my leagues late, and he turned out to be a star, and I’ll have Big Ben at QB in both leagues in this week’s fantasy football finals.

I admittedly don’t study much during fantasy football season, and rely on my handicapping for sports betting and other research, stats and projections to guide me during the season. My friends would tell you I’m usually not as active on picking up key players following injuries or sleepers that have evolved, but my team this year didn’t need much tweaking. I did pick up the Eagles other kicker Jake Elliott in both leagues after I had Sturgis and he went down with injury for Philadelphia.

What’s interesting about my college league is that we carry over two players each season. I carried over Gurley, but since I missed the playoffs last year, I had a higher draft pick and took rookie RB Leonard Fournette immediately with my first pick. I’m in good shape for the next 5+ years with Gurley and Fournette if they remain healthy!

Handicapping and betting on sports takes a stronger skill set and more time and commitment to your craft if you’re doing it for a living or a more serious endeavor. That includes those that have become more involved with in-game wagering. Serious fantasy players may argue otherwise, but regardless playing fantasy football and fantasy sports is a fun way for millions of fans to enjoy not only the games, but special times and laughs with friends while having a few bucks and beers on the line.