Off another winning week and now 29-19 ATS with 24 outright underdog winners this season, FairwayJay continues his pursuit of profit in Week 15 with more underdog picks and plays.

Our loser last week was on the Vikings Monday night, who failed multiple times on first and goal inside the Seattle 5 yard line trailing 6-0 in the fourth quarter. The hazards of betting were witnessed on the football field with missed face mask penalty calls and the blocked field goal by Seattle leading 6-0 when the Seattle player broke a rule which was not called as he leaped over the Vikings center with assistance and balance of his teammates. No call and no new set of downs for the Vikings. That’s part of the risk when wagering, and so is coaching and decisions, as the Vikings fired their offensive coordinator following that pitiful offensive performance Monday night. 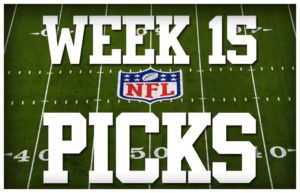 Back to shopping during the holiday season, and we continue to encourage using due diligence in researching lines and selecting quality offshore options from the leading online sportsbooks, along with legal sports betting options in the U.S. and Las Vegas sportsbooks. You cannot control market moves, but you can anticipate and make an effort to bet better numbers when available.

Fairway’s Football Forecast provides the picks and these leading online sports books offer the best experience and security to ensure you’re getting paid. Check out the reduced juice shops and the current market moves and advance lines as you prepare for your NFL Week 15 picks.

Road favorites are just 6-9 SU and 5-10 ATS the last two weeks, and we’ll look to cash in on more home underdogs like the Dolphins and Miami Miracle with our NFL Week 15 picks. Four home underdogs on the Week 15 card, and we’re on two of them below. Still considering the Jets as +7 becomes widely available and potentially +3 with Pittsburgh, as we also evaluate injury status, Big Ben and the coaching issues and decisions on those teams sidelines.

Seattle at San Francisco – This line has been moving and dropping even while we’re writing up the play on the 49ers. I was sending out +5 on San Francisco without the analysis, but waited as I went to the locker room to get some work done by the trainer. As I returned to the field, the line had dropped to 4. So be it, as the 49ers have a solid shot to spring the upset this week. Seattle is also taking 68% of the side bets as of Thursday at a consensus of seven leading offshore/online sportsbooks, yet the line is dropping. Reverse line moves are often a solid indicator of sharp action, and we’re on it as the situation and scheduling spot supports San Francisco (3-10). So does motivation for an embarrassing 43-16 loss two weeks ago in Seattle in which San Fran was on the wrong side of a minus-3 turnover differential and now have a league-worst turnover margin of -21. The Seahawks (8-5) enter off their Monday night win over the Vikings 21-7 in a game that was 6-0 in the fourth quarter. Seattle benefited from some key

missed calls by the officials, including the blocked field goal, but the Seahawks did increase their league-leading rushing numbers to 153/game after pounding the ground 42 times for 214 rushing yards against Minnesota.

But Seattle’s win Monday night nearly secured their wild card spot and even one more victory may get them the No. 1 wild card in the NFC. A final season-ending home game against Arizona is still ahead, while San Francisco showed last week against Denver that they are still playing with a purpose despite being shorthanded with a backup quarterback and running back. San Francisco led Denver 20-0 at halftime last week on their way to a 20-14 win, and QB Nick Mullens passed for 332 yards including 210 yard to TE George Kittle in the first half alone. Seattle could not slow Mullens and coach Shanahan’s creative offensive attack in Seattle two weeks ago as Mullens passed for 414 yards while playing from behind. Turnovers were troublesome, and a correction this week has the 49ers in position to get redemption. Running back Matt Breida could return against Seattle after missing last week’s game, but rookie Josh Wilson did rush for 90 yards in his starting debut last week.

The final verdict is that the motivation, situation and scheduling spot supports San Francisco, while Seattle exhales a bit and finds themselves scrambling this week against a San Francisco team ready to spring the upset.

New Orleans at Carolina – It looks like Superman QB Cam has traded in his cape for a skirt. Newton has led the Panthers offense to some pretty numbers during their current 5-game losing streak, including 437 yards per game average over their last three contests. But the yards and stats have not translated into enough points, as Newton has six interceptions in the Panthers last three games and the Carolina offense has failed in key red zone situations. Following the blowout loss at Pittsburgh, the Panthers have lost four close contests while out-gaining all four opponents by an average of 83 yards per game. 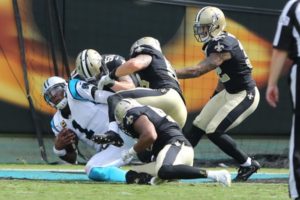 The Panthers read-option offense is still difficult to defend, and offensive coordinator Norv Turner has been calling solid plays as the Panthers have averaged 6.1 yards per play to match the Saints this season, and Carolina’s offense has averaged 6.9 yards per play over their last three contests. The running game with RB McCaffery and QB Newton likely runs more often this week, despite the Saints league-best 77 yards per game rush defense. The Panthers are No. 2 in rushing with 137 YPG and lead the league with 5.4 yards per rush. Cam Newton will need to be more proficient in his passing, but we’ll give him another shot this week to change into his cape and impress a Monday night football audience.

Despite a 10-1 SU/ATS run, the Saints high-powered offense has managed just 262 yards per game over their last three contests. New Orleans trailed Tampa Bay 14-3 at halftime last week but rallied for a 28-14 road win and fortunate cover. To no surprise, the squares are betting the Saints and New Orleans is taking 73% of the bets as of Thursday afternoon. That’s similar to when the Saints were a 7′-point road favorite at Dallas and we supported the Cowboys with our Fairway’s Football Forecast in a 13-10 home ‘Dog win by the ‘Boys. The Panthers last five home games have all gone over the total with at least 52 points scored, and this should be another Monday night shootout between division foes. It’s also another buy low and sell high situation, and while the Panthers need to win out over the final three games and play the Saints twice, this will be an all-in effort for Carolina and we expect to cash.

Enjoy the NFL Week 15 picks and hope you profit from the experience.