Professional Sports Handicapper FairwayJay continues his strong season selecting underdogs only with a 22-15 ATS record including 19 outright underdog winners. Follow along as Fairway fires for more green in his weekly pursuit of profit.

We continue with our NFL picks, predictions and parlays with a focus on underdogs. A winning season improved to 22-15 following last week’s 2-1 result with two more outright underdog winners on Dallas (+3.5) and Oakland (+5.5). The Vikings (+3) were out-played at Chicago in a 25-20 defeat, and missed the last minute 2-point conversion which impacted the betting results. We’ve now had 19 outright underdog winners on these pages and that includes 8 over the last three weeks while going 8-3 ATS.

Not much to like for us in Week 12 regarding underdogs, but we’ll chip-in two plays below on bad teams and ugly ‘Dogs. That might make some of you want to throw up your Thanksgiving dinner, but we’ll still try to fatten up further in our pursuit of profit with Fairway’s Football Forecast. 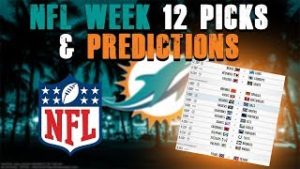 Do your best throughout each week to anticipate line moves and bet the best numbers, including with your NFL Week 12 picks. With so many online options and leading online sportsbooks to choose from and compare, it should be reasonable to expect using due diligence in your search for the best numbers. The Bills have dropped from +3.5 to +3 (EVEN), but with a Friday delivery that’s where the lines are at for Week 12 and I’ve mentioned previously that we can’t always get the best number with late week posting. We have, however, still managed to provide a majority of outright underdog winners. Know too that the point spread comes into play less than 15% of the time in competitively lined games (6 or less), so pick the SU winner and you likely have the ATS winner as well. Hopefully you’ve seen the power of playing a portion of your wager on the money line as well with the outright underdog winners. .

Fairway’s Football Forecast provides the picks and these leading online sports books offer the best experience and security to ensure you’re getting paid. Check out the reduced juice shops shops as well if you want to save and earn more with your wagers including NFL Week 12 picks.

Current lines from Las Vegas sportsbooks, along with market moves and Week 13 look ahead lines.

A patient approach this week with two plays, and let’s see if we can hit some more solid shots and get the green in Week 12 with these underdogs in Fairway’s Football Forecast.

Jacksonville at Buffalo – Both these teams are 3-7 and out of the playoff picture before Thanksgiving. While we knew the Bills would be bad, most prognosticators had the Jaguars winning the AFC South again and making another push in the playoffs. After blowing a 16-0 third quarter lead last week, you can put a fork in the Jaguars and have them as leftovers following your Thanksgiving feast. The Bills enter Week 12 following their bye week and they crushed the Jets 41-10 in their last game providing the offense with some positives moving forward after such struggles the first half of the season. Now a disrespected ‘Dog again, the Bills can get another win while also getting a little redemption for last years 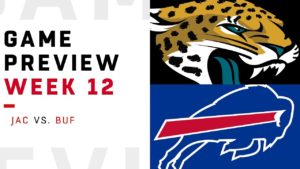 10-3 playoff loss at Jacksonville in the Wild Card round.  How can two teams be just 3-7 when they have top-4 defenses allowing less than 320 yards per game? The offenses have been atrocious and the quarterback play has led the way. Rookie QB Josh Allen returns to the lineup for the Bills this week, and while he’s a risk, and does provide a dual ability to move and escape pressure. Allen will have more success than Jaguars QB Blake Bortles, who the team is clearly lacking confidence in after running the ball 43 times in defeat last week with Bortles going just 10-of-18 for 104 yards. Bortles ranks No. 30 in the league in deep passes according to Pro Football Focus completing less than 10% throwing down the field. He’s top in check down passes to his underneath receivers and running back. So the Jaguars offense is predictable, and RB Leonard Fournette will be met by a stacked line and the Bills defense. The extra week or preparation and return to better health is a plus for Buffalo, and a strong defense at home against this poor Jaguars offense makes sense to support. Playing in Buffalo is one of the toughest environments in the league, and especially for a quarterback and team less familiar in that environment. While it won’t be freezing temps yet in Buffalo, the sunshine state boys are still going to struggle in upper New York, and in a game with a low posted total of 37 points, we back the Bills as an ugly live home ‘Dog.

Cleveland at Cincinnati – The Browns are one underdog this week that I believe will out-rush the opponent by a decent margin and give us a solid shot to rush to the window. I’ve discussed how a solid rushing advantage plays out to 75% ATS success year after year, and our projection played out perfectly on the Cowboys last week in their 23-20 outright win at Atlanta, as the Cowboys out-rushed the Falcons 132-80 with a 29-18 rushing attempts advantage. You still need a capable quarterback to 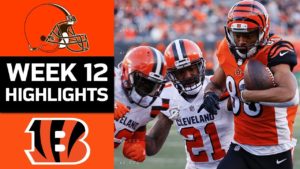 make plays, and rookie Baker Mayfield has been good but still presents risk especially on the road through his first year learning on the job. But the Browns offense has been better since they fired the turkey head coach Hugh Jackson, who is now an assistant to Marvin Lewis on Cincinnati’s staff. Before you believe that provides hopeless Hugh and the Bengals an advantage in knowing the Browns personnel and schemes better, remember you’re dealing with dumb (Lewis) and dumber (Jackson). That type of leadership rarely succeeds, and after the Browns (3-6-1) beat the Bengals (5-5), you’ll understand how that quality coaching and management is an important part of building a creating a winning environment and team. Marvin Lewis clearly didn’t make one in the offseason with his defensive coordinator, which he fired earlier this month as the Bengals defense set historically bad records by allowing opponents 500 or more yards in three straight games. While many will be reluctant to back the Browns knowing that Cincinnati has won this in-state division rivalry 7 straight times – all by double-digits – it’s time for that to change. Cincinnati is 1-4 SU/ATS in their last five games with their only cover in defeat last week despite the Ravens out-rushing the Bengals 265-48. That nearly always translates to an ATS win, but Baltimore did start a rookie quarterback making his debut last week who has poor passing skills. The Ravens ran a NFL-high 54 times last week, and that has to wear on the Bengals with the Browns seeing a chance to exploit another Bengals weakness on their deficient defense. Nick Chubb is getting nearly 20 carries per game since the Browns traded Carlos Hyde, and Chubb had a career high 176 rushing yards against the Falcons. He’s also one of the best running backs in the league with yards after contact. Duke Johnson is a bigger threat out of the backfield and led the team in receptions with nine against the Chiefs giving QB Mayfield more options. The Browns offense has also averaged 6.9 yards per play over their last two games after averaging 4.9 yards per play in the previous games, and we had Cleveland in our Week 10 underdog report in their 28-16 win over Atlanta. Mayfield has his best day as a pro passing with 3 touchdown passes, 10.8 yards per pass and a QB rating of 151. No longer is Hugh Jackson calling the shots, and the offense is responding to a new offensive coordinator and playing freely with more confidence. The Browns will take advantage of a Bengals defense allowing 6.3 yards per play and a league-worst 449 yards per game. Oh, and that run Bengals run defense is worst in the league allowing 153 rushing yards per game and 5.0 yards per rush. Remember, the Browns enter this game off their bye week, and along with the situational and fundamental advantages at the point of attack, the Browns will be plenty motivated to put an end to the Bengals recent dominance.

Best wishes in your pursuit of profit as you close out November and try to fatten up following the Thanksgiving feast.