As we move into NFL Week 4, Fairway’s Football Forecast is looking to add more underdog winners. The Lions (+5.5) helped us with an outright ‘Dog winner last week when more than 90% bets and money was on the Cardinals. Final: Detroit 26, Arizona 23. Unfortunately, the Cowboys (+5.5) blew the game and cover in a late loss at Seattle 38-31. Read more about that and the Week 4 picks in my weekly update at osga.com.

It’s a big week for Pro 🏈 favorites! Six different teams are currently favored by at least a touchdown at William Hill.

With more big spreads on the board, there are a lot more teams drawing strong action from bettors. 👀

Check out the Week 4 spreads and trends ⬇️

We’ll continue to provide our underdog only picks with a season to date record now 4-5 ATS and a 3+ year record on these pages of 81-59 ATS.

Lines can and have changed since the picks were originally posted at osga. The weekly market moves can also be compared to the following weeks lookahead lines. Check current lines, odds, totals and moneylines at TheLines, where I’m a regular contributor.

There are a number of positive profiles lining up on Detroit off their upset win last week and returning home to play the Saints. New Orleans and Detroit are both 1-2 after the Saints were beaten at home by the Packers. Detroit got a 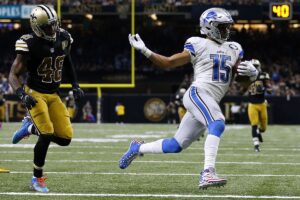 little healthier last week and the return of top WR Kenny Golladay was a big boost and TE T.J. Hockenson should be a prime target this week too against a Saints defense that is struggling and allowing 31 points per game. Drew Brees is throwing a majority of short, underneath passes and while RB Alvin Kamara will get his share, the Lions as a home ‘Dog at this price is a solid play to support.

Seahawks QB Russell Wilson is the clear MVP to me thus are with 14 TD passes in three Seattle wins. He’s covered the A— of a Seahawks defense that has allowed a league-worst 497 yards per game. Sure Seattle has played some top offensive teams and quarterbacks in Atlanta, Green Bay and Dallas. But the situation doesn’t get much better than this at Miami to support our favorite fish and Dolphins despite Miami’s own poor defense thus far. Seattle paid a price in victory last week as they were decimated with injuries. Check out the laundry list including RB Chris Carson as it comes out Friday. Seattle makes the longest road trip of the NFL season this week while Miami comes off a Thursday night win in Jacksonville with its best showing and extra rest and preparation at home. These situations are where NFL upsets are born.