Each week during the NFL season, the Westgate SuperBook in Las Vegas, FanDuel, PointsBet, William Hill and other selected sportsbooks release the betting lines for the following week’s games. These lines offer a glimpse at the projected betting lines up to 10 days in advance of the games. This week we provide and evaulate the Week 6 lookahead lines.

I update these NFL Week 6 lookahead lines and current week market moves initially each week in the Recency Report at TheLines. I also review weekly stats and provide information you can bet on in reports and Inside the Numbers updates. I contribute sports betting industry updates at TheLines and chip-in information you can bet on. I’ll update a bit more here each week with links to other NFL team info and tools you can use for your own handicapping and betting.

These ‘NFL Lookahead Lines’ or advance lines can be useful in not only projecting ahead to next week’s games and lines, but also to keep you from over-reacting to one game or the upcoming games results.

A key game in Week 5 is Indianapolis at Cleveland, which had the Colts a 2.5-point favorite on the lookahead line, and reached Colts -3 early week. Now, there is fluctuation with Colts -1 and even Browns -1 at FanDuel Sportsbook.

The Week 6 lookahead lines are the same at FanDuel and William Hill except for two games. Baltimore (-7.5 or 7) at Philadelphia and Arizona at Dallas (-3.5 or 3). 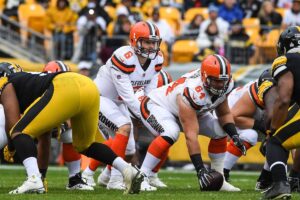 The Thursday night game between the Chiefs and Bills in Buffalo has been moved to Sunday, Oct. 18 as COVID-19 protocols and controls are implimented as more players are sidelined with the coronovirus.

Cleveland at Pittsburgh: The Browns and Steelers game looks like the biggest of the week outside of Chiefs vs. Bills as the two teams could be playing for first place in the AFC North. The Browns enter Week 5 at 3-1 while the Steelers are 3-0 and Ravens are 3-1.

HOW TO USE LOOKAHEAD LINES

We’ll be updating the NFL advance lines each week to allow you a sneak peek at the projected lines for the following week’s games. This advance information from a big bookmaker provides lessons in understanding lines and projections before the current week’s games are played.

The tendencies for many bettors is to overreact to previous weeks’ scores and results. The lookahead lines provide a sense of stability from the linemaker, who is unbiased in setting the lines in advance without the information from the current week’s contests.

Bettors can also gain an edge or find value in the lines once the current week’s lines are released. They do this based on not only a potential overreaction to the recent week’s results, but by using information they have on teams, including power rankings. Making adjustments is part of the process, along with formulating an opinion on certain teams. This can be based on personnel, injuries, situations and stats that come to light as the season progresses.