It might appear as an innocuous match on the week’s European futbol slate, but Athletic Bilbao at Real Betis on Friday could be a golden opportunity on which punters could capitalize in more than one way.

Most intriguing is that Los Leones, the fiercely independent Basque squad, and Betis are sides heading in opposite directions. Bilbao has only dropped one of its previous eight matches (going 3-1-4), while Betis has only one win in its past eight tilts (1-5-2). 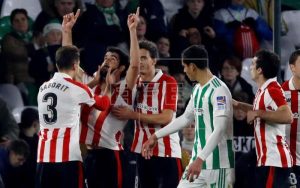 Moreover, Bilbao has won five of the previous six games between the two clubs. Real’s only victory in that stretch came last season inside its Estadio Benito Villamarín, in Seville, in which Er Glorioso tallied the lone goal. That will be Friday’s stage, which kicks off at 10:30 a.m. (Pacific) and will be televised on the beIN network.

In those five victories, Bilbao outscored Betis, 12-4. Expect that success to continue Friday. Real also lacks Bilbao’s exceptional lineage, since Betis was relegated from La Liga, Spain’s premier division, after a dismal 2013-14 season and had to battle, in ’14-15, to return to the top flight for 2015-16.

It is attractive, too, that Bilbao can be found at a plus-135 price, on three-way lines, so the play should be toward the Basque side and 36-year-old striker Aritz Aduriz, the club leader with six goals. It’s as enticing as AS Monaco was last Friday, when Les Monégasques were only minus-130—with no additional goal penalties of 1½ or 2, say, which had been expected—against French Ligue I side St. Etienne. Monaco’s 4-0 triumph was a mere afterthought.

If the option is to pass on Bilbao, it could be used in a more unofficial capacity – for a libation, perhaps, in a bar bet. Of the 10 founding members of La Liga, which began in 1929, only three sides have never been relegated. Foes will surely rattle off FC Barcelona and Real Madrid in quick-fire, then might pause, mumble, stumble and – hopefully – rattle off, say, Racing Santander or Atlético Madrid.

The third part of the trifecta, of course, is Bilbao.

Rob Miech contributed to this article.