Woods vs. Mickelson $10 Million Winner-Take-All Match-Play Event in the Making

We’ve seen this before, and I’m not talking about Woods vs. Mickelson competing on the golf course. It’s the big money events that grab the attention of sports fans, bettors and the broadcast media networks. The sponsors and advertisers ante-up, the media and promotors hype up the event and social media gets in on the action with opinions flying faster and blasting farther than the golf balls Tiger and Phil smash. 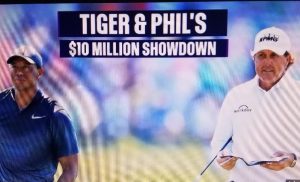 Big money events have been consuming the sports and gambling world more recently with events like: 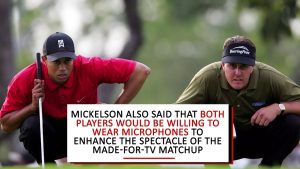 The Pegasus World Cup is a $16 million event that started in 2016. Mayweather and McGregor both pocketed more than $100 million in 2017 with a record handle wagering event. The World Series of Poker Main Event champion is crowned July 14 in Las Vegas and will capture the $8.8 million first place prize. This year’s WSOP Main Event was the 2nd largest field ever. The Westgate SuperBook in Las Vegas hosts a NFL handicapping event that has been growing exponentially in recent years with the winner of the contest taking home more than $1 million. I have had success in that SuperContest, and also cashed in WSOP events, but not in the Main Event which I’ve played in twice. 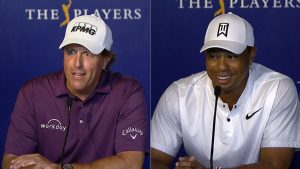 The Mayweather McGregor fight set wagering records at the sports books. Even with Floyd ‘Money’ Mayweather a prohibitive favorite of better than 5-1. And that’s because the big ‘Dog McGregor took so much betting action as the UFC fan favorite.

“The handle is insane. It is easily going to pass the handle for any fight ever booked in the state of Nevada. The liability is equally insane, as tickets are coming in on Conor McGregor at about an 18-1 clip,” said William Hill U.S. director of sports trading Nick Bogdanovich.

Imaging the wagering interest on a Woods vs. Mickelson marquee match-up event.

The potential props offered and bet on Tiger vs. Phil would add the insatiable interest. This will be Taylor Made (Woods) vs. Calloway (Mickelson), the irons and woods the two players now have in their bag, and plenty of Nike apparel still sponsoring the event with Woods wearing the ‘swoosh’ and Mickelson in his new long-sleeve shirts from Mizzen+Main. 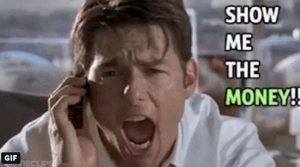 The reports of a Woods vs. Mickelson $10 million match-up surfaced over the past week in a winner-take-all must-see-TV event. The players have agreed to wear microphones to enhance the viewing experience and pleasure of the audience. The event had been in the making for July 3 in Las Vegas at the lush Shadow Creek Golf Club, and is now being considered and planned for later this year.

“I just think it would be something that would be really fun for us to do, and I think there would be a lot of interest in it,” said Mickelson, now 48 following his birthday over the U.S. Open weekend. 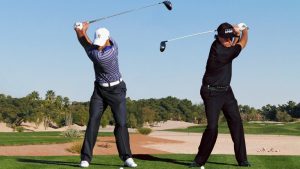 Mickelson has won 43 times on the PGA Tour with 5 major championships. Woods, 42, has been stuck on 79 PGA Tour wins and 14 major titles since his last victory in 2013. But the two golf icons have a vision beyond this $10 million match-up, and it involves even more money, of course. Future match-ups, appearances and even Tiger and Phil partnering up against two other top golfers in another match-play event is something we could see in the near future. Woods and Mickelson are likely to secure a piece of the sponsorship, merchandise and TV revenue as part of their agreement, as branding big names and big money seems to draw fans and drive revenues. Wait until the betting begins

As the sports leagues pursue a piece of the betting action with proposed ‘integrity fees’ following the SCOTUS ruling, and states pass legislation for legal sports betting in the U.S., will we also see more athletes trying to get a piece of the pie through sponsorship or use of their name and brand for playing a game? Will we see owners and trainers of horses like Triple Crown winner Justify try a money-grab with a head-to-head horse racing match-up event? Those races did take place decades ago, and it’s not farfetched to think we might see that and future big money events between big name athletes in the new future. You can bet on it.