One of the best golf courses in America hosts the U.S. Open for the sixth time, and watching the top pros play Pebble Beach Golf Links is worth watching simply for the scenic seaside sites on the Monterey Peninsula. 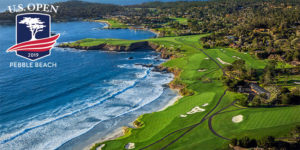 I provided some thoughts and insight on the 2019 U.S. Open at Forbes, including betting odds, props and some picks to win.

Each of the last seven winners of the U.S. Open since 2011 had odds to win of less than 50-1, making the winner more likely to come from the players below.

All players odds to win from the Westgate Superbook and GolfOdds.com.

Fairway’s Foursome to win the U.S. Open from the players chart above:

Fading some players in U.S. Open tournament match-ups including Bubba Watson, which was similar to our fade of him in multiple match-ups at the 2019 PGA Championship and cashed in when he missed the cut.

Be sure to check out GolfStats.com as a great resource for weekly PGA Tournament previews, stats and past performance charts. The information and insight provided is by golf writers and industry insiders who travel with the PGA Tour and accumulate the data and information on the players.

Not as many drivers from players off the tee this week, and accuracy and placement from the tee and fairway on approach to the tiny greens is vital for success. But of the strokes gained stats, consider these as you study the players and profiles for your bets or fantasy pool inclusions.

*Strokes Gained Approach-the-Green: Takes into account the number of greens and the proximity to the hole in the interest of saving shots.

*Strokes Gained Around-the-Green: Number of strokes gained from shots around the green, lot of it is scrambling and bunker play.

*Strokes Gained Putting: The number of strokes gained in putting.

Enjoy a hole-by-hole preview of Pebble Beach, where the greatest meeting of land and sea is narrated by sportscaster Jim Nantz.

Beyond the stunning backdrop along the Monterey Peninsula,  the 2019 U.S. Open champion will come from a list of contenders that show mental fortitude and overcome obstacles while playing with precision, patience and finding fairways and the tiny greens on their path to par.