Denver Broncos Expected to Struggle in 2017

A Fairway follower and friend sent me some updates on the Broncos this summer, and asked me to look at Denver’s schedule and season win total (8.5) at the sports books. After reviewing and digging deeper, a bet was made UNDER Denver’s team total. Here is my insight and analysis to what we expect to be a winning wager betting against the Denver Broncos this season.

General Manager John Elway has made some great moves during his management tenure in Denver that includes a Super Bowl championship two years ago. From adding Hall of Fame QB Peyton Manning, head coach Gary Kubiak, adding key players through the draft and trades, to building one of the dominant defenses in the league, Elway has made many great reads and decisive decisions. Unfortunately, 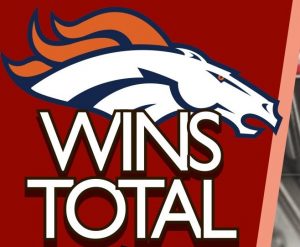 time will likely tell that his worst one may be the new head coaching hire of Vance Joseph to start the 2017 season. A defensive coordinator for one season with the Miami Dolphins following years as a position coach, Joseph returns to the Rockies after playing college ball in Boulder at the University of Colorado. But the stampede of momentum that he’s expected to keep going with this winning organization is going to go the wrong way. And it should start with a hard hit in his first year in the Mile High.

The best move the organization made in the coaching ranks was to bring back Mike McCoy as offensive coordinator after leaving Denver to become San Diego’s head coach in 2013. Joe Woods moves from Denver’s secondary coach to defensive coordinator, an internal promotion but not necessarily a good one. But as dominant as the Denver defense has been, it likely falls at least a few notches this season. Overall, the coaching drop is significant, and a grade of well-below average is this analysts rating.

The Broncos have settled on Trevor Siemian as its starting quarterback to start the season. He’s been better than most probably projected with low expectations as a 7th round draft pick out of Northwestern in 2015. Following Hall of Famer Peyton Manning, Siemian’s first full year starting in 2016 was a pretty good one with 3,400 passing yards in 14 games with and 18-to-10 TD/INT ratio. The Broncos however 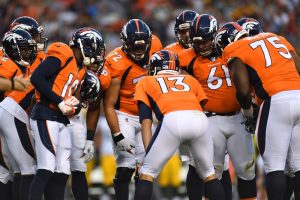 missed the playoffs for the first time in six seasons finishing 9-7 and a distant third in the AFC West division. Denver was also 9-7 ATS at the sports books last season, but I expect more losing for the Broncos both SU and ATS this season.

Siemian ranks below average overall, and last year’s top draft pick Paxton Lynch couldn’t beat him out for the starting job. Coach Kubiak managed and manipulated Siemian to fit the offensive system last season, and now he learns a new one under Mike McCoy. You saw in San Diego with QB Rivers and previously with a healthy Manning in Denver that McCoy’s offense is very pass friendly. But that’s not a good thing with either of the QB’s in Denver.  Coaching and learning a system is crucial to player development. Siemian has time to learn and grow, but he’s fairly limited as a passer, often needing a clean vision of the play pre-snap in order to succeed. This leads to more inconsistency, both on a week-to-week and a play-for-play basis. Overall, Siemian is more of a hindrance for a Denver team that still features a top-tier defense. He’s by far the worst quarterback in the toughest division in football last year, and if Siemian can’t convert enough plays and 3rd downs, that defense will be on the field more often and not as dominant as recent editions.

The Broncos offensive line is rated average at best. Rookie first-round pick Garett Bolles could elevate the status if he performs well at left tackle, as the Broncos have a Pro Bowl-caliber guard in Leary and solid center in Paradis, but he’s coming off two hip surgeries. Now a rookie left tackle is expected to protect a sub-par QB with an offensive line that allowed 40 sacks last season and more than 100 knockdowns. Add in more potential pass plays with McCoy calling the plays in a new system for all offensive personnel, and it sets up to be a year of learning, growing pains and adjustment for the offense and running backs from the zone running scheme of recent years.

Denver’s defense has been dominant in recent seasons, allowing less than 295 yards per game and 4.5 yards per play in 2015, and less than 320 YPG and another league-best 4.7 YPPL last year. In 2014, the numbers were also nearly as strong. The personnel may still seem solid, but they lose a top coordinator as Wade Phillips was not retained, and he landed in LA with the Rams. Joe Woods is a huge downgrade to coordinate the Denver defense. Now add in the retirement of one of the league’s top outside linebackers in DeMarcus Ware, who’s bulging 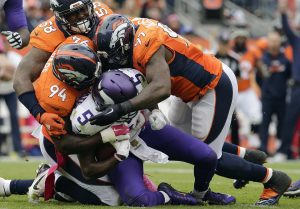 and herniated disc is a reminder of the brutal beating the body takes in the NFL. Von Miller is a star and All-Pro, but he’ll have added pressure and face more double teams.

Last year the Bronco’s run defense dropped off considerably from their championship season. Denver allowed 130 rushing YPG, nearly 50 yards worse than in 2015, as free agent departures were part of the problem. Teams pounded the ball on the ground an average of 30 times per game; ranking No. 30 in the league. So while the secondary is still strong and the pass stats say the Broncos had the best pass defense in the NFL last season, know the stats were a big skewed with teams running the ball more and opponents pass play percentage (55%) ranking No. 4 against Denver’s defense. When a defense fails to slow down an opponent’s running game, it wears them out. Then having to face a solid trio of QB’s in Rivers, Carr and Smith within the division six times makes it even tougher.

That takes us to the Bronco’s schedule, and it’s pretty brutal. Along with the toughest division that looks strong again this season, Denver will be very challenged to win even 7 games in my estimation. In fact, a dropoff to 5 wins like San Diego had last season would be no surprise. The new LA Chargers in Week 1 look live to upset the Bronco’s, and then Dallas visits the Mile High in Week 2. The opening road trip follows to Buffalo, and that stadium may be the most difficult to play in the league for a QB that is unfamiliar and less experienced. The Broncos return home in Week 4 to tackle the Raiders before their bye week. I think a 2-2 start might be as good as it gets, and that’s with three home games. Understand that Denver’s four opening contests will have a betting line of 4 points or less.

Following the NY Giants and their solid defense and strong secondary at home in Week 6, it’s lights out for the Broncos with three straight road games, and likely losses according to this analyst – at LA (Chargers), at Kansas City on Monday night, and then a short week at Philadelphia. The bleeding and beating won’t stop, as the Broncos return home to play the Patriots. As losing settles in, Denver will be pressing to beat Cincinnati now in Week 11, and then play four of their next five games on the road. That will start in Oakland, where the Broncos get the stuffing knocked out of them Thanksgiving week. Heading into December, we could have our bet won, but if it takes another loss or two, no issue. Denver travels to Miami off a downer against the rival Raiders, and then returns home for their gimme game against the NY Jets. Then a short week on the road at Indianapolis on Thursday in Week 14 is followed by their final road game out East at Washington. Denver finishes the regular season against Kansas City in the Mile High, and by then the Broncos fans will already know the reality of the situation – the playoffs are nowhere in sight.