The Avalanche are up to -1500 to win the series, and were -190 at the start of the Stanley Cup to beat the two-time defending champion Lightning.

A win tonight makes the Avs 16-3 in this year’s playoffs – the second-best Cup finish since the Wayne Gretzky-led 1988 Edmonton Oilers, in Gretzky’s final season in Edmonton and their five Cup dynasty from 1984-1990.

My Game 5 and Cup series preview includes added insight from my former college hockey coach, who holds a PhD in Sports Physiology. Back in high school, I used to have lengthy phone conversations with ‘Cardiac Jack‘, who became one of my college coaches when I played (JV) hockey at the University of Minnesota. Jack was an advisor for 1980 Olympic coach Herb Brooks ahead of the U.S. Gold Medal ‘Miracle on Ice’, and on staff when Herbie was the head coach of the New York Rangers from 1981-1985.

Jack later was an assistant high school hockey coach, as was I in the 1990s, to my friend and now 500+ game winner Ken Pauly at powerhouse Benilde St. Margaret’s in suburban Minneapolis. Jack’s knowledge of the human body, training and physiology has been passed along for decades, and Cardiac Jack was honored with the Lester Patrick Trophy for outstanding service to hockey in the United States.

My dad had a special relationship with Jack,” said Daniel Brooks, Herb’s son. “Jack was his main advisor on helping him implement more of a fast-paced, highly-skilled European type game. Herb was obsessed with the Soviet style of game and training and Jack, being a professor, sure helped him with that transition.” 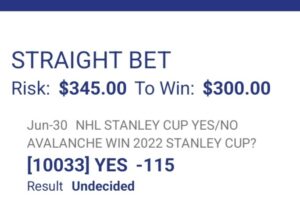 Jack’s ‘cardiovascular fitness’ regimen began in the late 1970’s while earning his doctorate degree at the University of Minnesota School of Physiology.

“My biggest finding was that by training for intervals of speed and quickness off ice, you can improve on-ice speed and quickness,” Blatherwick said. “It wasn’t just about training players from the 1980 team to skate faster but train them to perform skills and decisions at that speed.

“That’s what I call overspeed training; training so fast that they have to make decisions and perform skills at a speed that’s usually uncomfortable for those skills. That was the thrust of the training for the 1980 Olympic Team.”

Jack passed this along with his background and understanding of physiology.

In case you’re watching, an interesting physiological fact as the Cup playoffs proceed. It’s a huge endurance advantage in hockey games to live, practice and play at Denver’s altitude. Your lungs – and all other parts in the chain of organs and chemistry that deliver oxygen to muscles – are super-enabled for that task. Therefore, the Colorado Avs have a distinct (and measurable) advantage in maintaining a fast pace for the length of a game and for a 7-game series.

I added more Game 5 bets to my Stanley Cup series bet on the Avalanche, which I placed following Game 1 of the Western Conference Finals vs Edmonton. See more details in my Stanley Cup Finals update.