The NFL is America’s most popular sport to bet on, and king of the TV market. Last year, 64 NFL games occupied the top 100 live broadcasts of all television shows. The popularity of the NFL is unmatched, and beyond the fantasy football fanatics, sports betting is the major growth segment that will fuel the future growth of the TV and media markets. 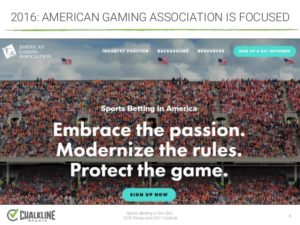 A recent survey conducted by Morning Consult for the American Gaming Association show more than 38 million American adults plan to bet on NFL games this season, and 24% of American adults say they would place a bet on the NFL if it was legal in their state.

FairwayJay covers more findings from the survey, and research and reporting as a sports betting contributor for Forbes.

The NFL betting survey indicates that 75 percent of NFL bettors say they are more likely to watch a game they bet on.

More information and insight in this article at Forbes, including the continued rapid growth in sports betting and the increasing number of American’s who will bet legally.

As Dallas Cowboys owner Jerry Jones told Yahoo Finance this week, “Betting and wagering has been an integral part of the NFL for a long time…The viewership is where our numbers will increase. People will stay longer. That value is how our sport will benefit from gaming. I dare say that gaming will increase the value of television, of presenting our games, I dare say it will go up 50% because of the gaming concentration.”

Vegas Sports Media is an affiliate of Vegas Sports Zone and provides articles, info and insight with analysis to educate, inform and entertain sports and gaming fans.